Dear Celtics, show us SOMETHING in Game 5 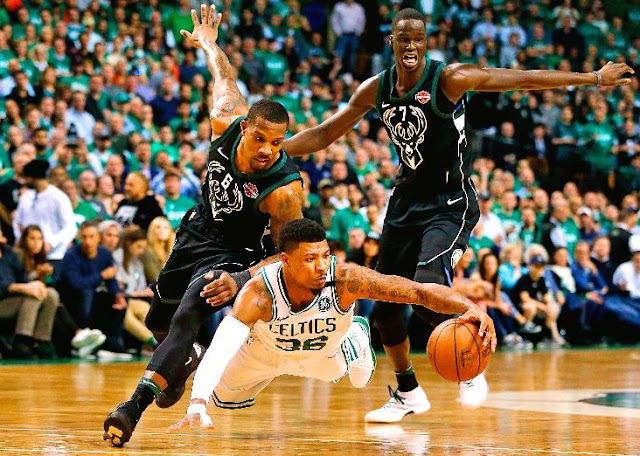 After their embarrassing loss in Game 4, the majority of Celtics' fans went on rant after rant about this current edition of their not-so favorite basketball team. But as time has cooled off and you realize how ridiculous you may have sounded to your wife at 10pm while she is trying to sleep (sorry hunny), all you can really do as a fan is sit back and watch Game 5.

With 48 hours too take a step back, I just have a few requests.

I want effort. I want fight. I want to see that you have a pair (not actually that would be gross).

I get the Milwaukee Bucks are arguably the best team in the Conference, if not the whole NBA. I get that they have the MVP. I get they have a sharpshooter in Kris Middelton, who seemingly is the second coming of Mark Price and Craig Hodges (timely reference). I realize George Hill has turned back the clock.

I get that the Celtics have a slim chance of even forcing a Game 7, but just show me that you care.

The fans of this team enjoy watching effort and fight on the court more than most fan bases. It's why Marcus Smart is a fan favorite. It's why we loved Perk. It's why we anointed Kevin Garnett a Bostonian before he even played a game for the Celtics.

We cheer for the scrappy guys as much as we do the superstar dropping 25 a night.

As Celtics fan in his mid (cough cough late) 30's, Paul Pierce was, is, and always will be my favorite Celtic. In his career he made memorable after memorable shot, but there's one play that sticks out when I think of his career. Which is him diving for a loose ball in the closing minutes of Game 7 of the 2008 Semifinals against the Cavs. A game where Pierce scored 41:

I just want that. I want you to leave it all on the floor. I don't want to see isolation basketball, unless your fearless "leader" Kyrie Irving can go off for 40. Then I will eat crow.

I want Gordon Hayward to think score first, rather than kicking the ball out when he is at the rim.

I want to see Al Horford flex when we grabs an offensive rebound and gets fouled for an and-one.

I want to see Jayson Tatum take the ball to the rack, rather than settle for a contested 20-footer.

I want to see less of Terry Rozier.

I want to see a Jaylen Brown dunk in Brook Lopez's face.

I want to see Brad Stevens out coach Mike Budenholzer.

But most of all, I want to see Game 6 back in Boston on Friday Night.

Rob Welch5/08/2019 05:22:00 PM
Share
Rob Welch
I have been a die hard Celtics fan since birth, even though I don't really want to talk about the ML Carr/Rick Pitino Eras but I will if necessary.
Newer
Older