The Boston Celtics mercifully ended their dreadful 2018-2019 season with a 116-91 loss to the Milwaukee Bucks in Game 5, losing the series 4-1. There aren't really any words to describe how disappointing and unenjoyable this season has been. The hype surrounding this team was palpable, and from the jump you could tell that something was off. Still, nobody would have expected Boston's season to end in this fashion, being beaten so soundly and in such a dominant way. The summer only brings more uncertainty, and the uneasy feeling that everything this team has been building is about to come crashing down. 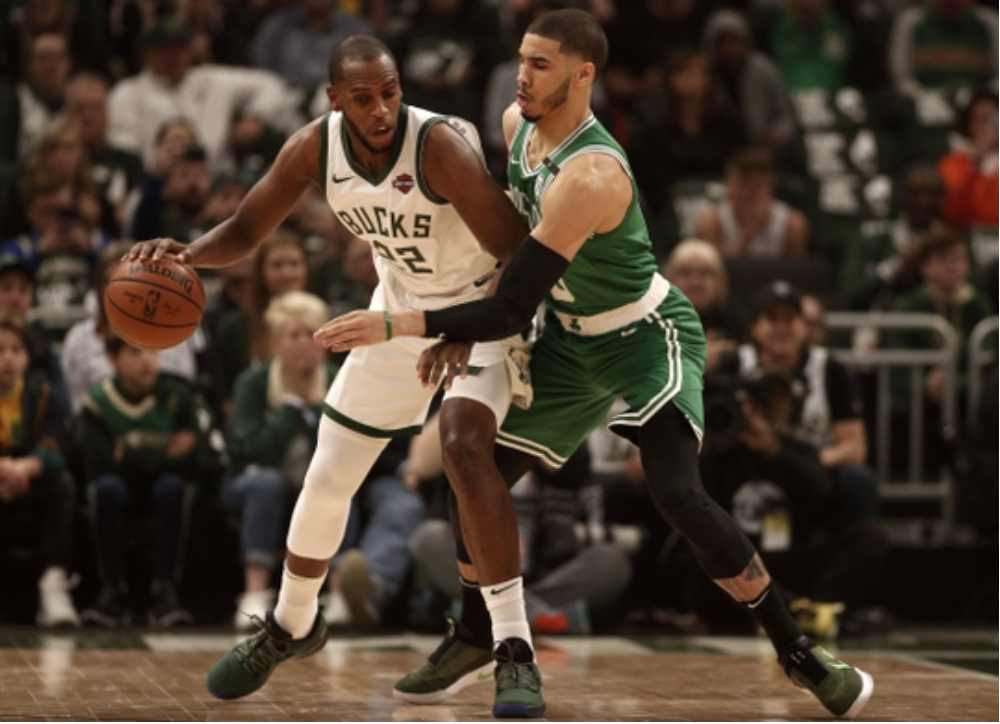 There was much to discuss even before the start of Game 5 for both teams. After having not played since March, Malcolm Brogdon made his much anticipated return to action for the Bucks. Brogan was a 50/40/90 player throughout the regular season, and is one of their best perimeter defenders when fully healthy.

Per Mike Budenholzer, Malcolm Brogdon will be listed as probable for Game 5 tonight and is expected to play.

And the Celtics, searching for answers, shuffled their starting lineup. Aron Baynes was inserted into the starting group, while Marcus Morris was moved to the bench. Brad Stevens needed rim protection, and Morris' scoring would presumably help the slumping bench group.

In what was probably the worst case scenario for the Celtics in a must-win game, the Bucks started the game on an 8-0 run, thanks in large part to five quick points from Nikola Mirotic. Given the fact that their season would be over if they didn't win, Boston's energy and effort were nowhere close to what they needed to be.

Celtics energy does not appear to be that great so far.

The Celtics were terrible from the field to start the game. They made just four of their first 15 shots (26.7 percent), and Kyrie Irving in particular was taking some very difficult, inefficient shots.

After the Bucks had opened up a double digit lead, the Celtics were able to slowly trudge their way back to a competitive game on the backs of Marcus Smart and Morris. They weren't making shots, but their defense and grit really gave the Boston some life on a night where the shots weren't falling.

With the bench grinding out good possessions, the C's finished the quarter on a 12-4 run to, at one point, take a slight lead, before ultimately going into the second quarter down by three.

At some point, the Celtics will need to make some shots. They're only down three after shooting 6 for 26 in the first quarter, though. Defensive effort WAY up compared to the second half of Game 4.

After weathering the storm and keeping the game close despite terrible shooting, the Celtics unraveled a bit and the Bucks opened the second quarter on a 7-0 run to take a 10-point lead. While the Bucks weren't doing that much better on their end, Boston just couldn't get any good shots. Every shot was contested and the offense was stagnant.

#Celtics are now down to 20 percent FG

At this point in the game (6:15 left in the second), Kyrie was unplayable. Besides missing every shot (2-11) and horrible effort on defense, his demeanor was not that of a team-leader. Not only was he missing shots, but he was not coming anywhere close to the hoop, including an air-balled three from the right wing that missed by legitimately two feet. It was an embarrassing performance for a player who has consistently said that he can be a number one option on a championship-caliber team. If the Celtics were going to win, they were going to do it in spite of Kyrie, not because of him.

Kyrie to the bench. Let's see what happens with the Celtics defense. Feels like this might be the group for Brad to ride with tonight.

The Celtics continued to shoot the ball miserably, but did enough on the defensive end to not let the Bucks extend the lead much beyond 10. Kyrie hit three shots in a row, and Boston was able to cut the lead down to six, but the Bucks stormed back to close the half on a 14-7 run to take a 13-point lead into the break.

The missed shots, the sloppy defense, the minimal effort, they all culminated in one of the worst halves of basketball in the biggest game of the year. A lot of the hate, and rightfully so, should be on Kyrie for his horrible shot selection early on, but Jayson Tatum, Jaylen Brown, and Al Horford couldn't hit the broad side of a barn either. Giannis Antetokounmpo only had six points in the first half, but the C's still couldn't manage to keep the game all that close.

After Baynes was a team-high -22 in the first half, Stevens decided to enter Morris back into the starting group in the second half.

The #Celtics go with Marcus Morris to start the 3Q instead of Aron Baynes.

Brown and Tatum, who had been nonexistent in the first half, combined for 11 points in the first four minutes of the third, but the Bucks were able to answer any shift in momentum with a made shot. Khris Middleton, who apparently made a deal with the devil so that he would never miss a shot when playing against the Celtics, seemingly nailed a three whenever Boston looked like they were going to put together a little run and close the gap.

The only thing keeping the Celtics out of a blowout was their ability to get to the line early and often in the third quarter. The team got into the penalty midway through the quarter, and were able to consistently force the issue and get a ton of looks at the free throw line. But even with that advantage, the Bucks and Middleton were unwavering and would not hand over momentum.

Celtics are attacking, getting to the line and making them. Big reason they're still in this despite the lousy shooting.

While the Celtics were able to keep the lead hovering around 10 for most of the quarter, the Bucks put together a mini run with just over two minutes to go and broke the game open.

The Bucks took an 18-point lead into the fourth quarter, and what had started as a season full of expectations and excitement ended in the worst way possible. There was no reason to watch the final quarter, the Celtics had no answers for the Bucks in any area of the floor. Giannis didn't even need to have a big game to beat the C's, and they had little chance of making enough shots to put any kind of run together.

As the fourth quarter went on, you could see that the Celtics had no more life left in them. They had been thoroughly defeated, across the board, and their minds were on a summer of uncertainty. Everyone on this team, those who will still be here next season, at least, need to take a serious look in the mirror and take stock of what kind of makeup they have as players. This team needs to get back to a defense-first, ball movement system of years past. Stevens needs to find the right rotations, and Danny Ainge needs to make the moves for the right players. This year was a massive disappointment, and one of the least enjoyable seasons to date.

Truly wild that this Celtics season that started with real NBA title aspirations is going to end by getting walloped in the conference semifinals in 5 games.

See you next year, Boston.