Can Danny Ainge pull off a Kevin Garnett-like trade for Anthony Davis?


With the New Orleans Pelicans snagging the #1 draft pick in the Lottery last night, the stage may be set for a youth movement there. Flashback to 2007. Kevin Garnett wanted out of Minnesota. The Timberwolves' Kevin McHale and Danny Ainge had a close relationship, and the T-Wolves knew it was time for a move towards a younger crew. Anthony Davis apparently still wants to depart New Orleans, even after the Lottery win that will net the Pelicans Zion Williamson. And Ainge and the Pels David Griffin have been friends for a long time. 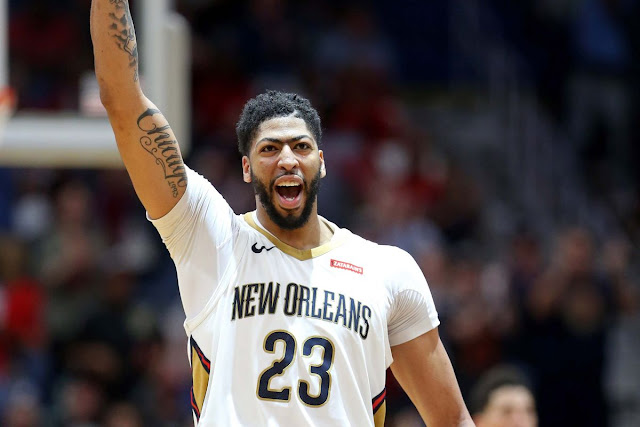 For those that forget the large contingent of players that were sent to Minnesota to snag KG, here they are. The prize was Al Jefferson who had youth, size and skills. Then there were Ryan Gomes, Sebastian Telfair, Gerald Green, Theo Ratliff and two 2009 first-round picks.

Now back to today. There will be no Jayson Tatum/Jaylen Brown/Marcus Smart-for-Davis trade. No way Danny sends all three away. I would be surprised to see even two of that trio involved. But Griffin wants a future star, draft picks and young talent. And, of course, the dollars need to match.

So the big question is - who is the future star that Griffin wants and that Ainge would agree to send away? Despite Tatum's decline in the Milwaukee series, he is almost certainly a future star, maybe even a superstar. Griffin can possibly imagine a Zion/Jayson front court already - with Jrue Holiday supplying the stability and 2-way production in the back court.

I immediately see Guerschon Yabusele and Rob Williams as part of this deal. Terry Rozier on a sign and trade? Perhaps. Semi Ojeleye? I hope not. Let me also state that I am fine with going forward with the current crop of youngsters, but my feeling is that Danny sees the need to go for it all. And I must admit, Boston desperately needs a big, rebounding/shot-blocking center. Davis is all of that - and much more.

Do the Celtics still have a shot at Anthony Davis after the Pelicans landed the No. 1 pick?

There will be a bidding war for AD's services, but Ainge will not sell the farm. It is meaningless to say that the Celtics have the most assets for such a trade. We still don't know what Jaylen Brown's ceiling is. Despite his youth, he is well-grounded and superbly-skilled. Rob Lob? We don't know how good he can be. We hardly ever saw him in action.

Oh, and how about Kyrie Irving? He reminds me a lot of a number of our CelticsLife readers who, after our ejection from the post-season, wrote comments on our articles that were - to say the least - salty and somewhat bitter. That is human. Can Kyrie change his attitude? I say, yes, he can. Winning brings humor, fellowship and good will. Speaking of humor, take a few minutes to take in the video below. It is great.

Check this out, hat's funny afhttps://t.co/NJQCTn2ZIt

That's all for today. There were many errors in judgement and restraint made by a number of individuals in this disappointing season. It always cheers me up to realize that having choices in our lives is such a positive factor. Making the right ones makes almost everything better. Let's hope whatever happens brings the best outcomes.