The Indiana Pacers are well aware that Kyrie Irving controls so much of what the Celtics do, and in Game 3 last night they focused much of their attention on him. It gave Jaylen Brown a chance to shine on offense, and he came through big-time in the win. He finished the game with 23 points on 8-of-9 from the field and 4-of-5 from beyond the arc. He continued his poor free throw shooting (3-of-7), but his scoring, accuracy, defense and rebounding (7 boards) more than made up for it. 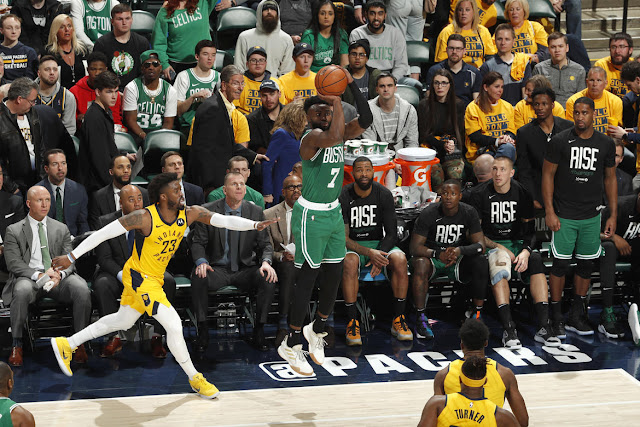 Jaylen Brown's 23 points will get the headlines but another big night for him on the glass (seven rebounds) is just as critical. Incredibly, the C's have been the best rebounding team in the NBA these playoffs while staying small a lot: https://t.co/Su9gDyYzem

By the 4:35 mark of the first quarter, Jaylen already had racked up 11 points on three 3-pointers and a running jam. He was aggressive, and Indiana had no answer for him.

Brown was due to explode on offense. In the first two games, his defense was solid, but his offensive production was lacking. That changed last night. Boston has multi weapons, and Brown is one of them. Focusing on one or two Celtics players by Indiana won't work. Boston just needs one more win to move on to Round Two.