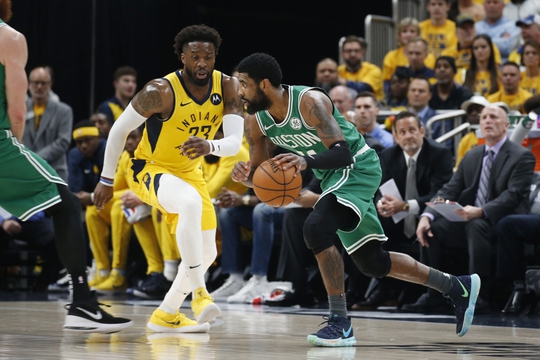 The Boston Celtics took a 3-0 series lead over the Indiana Pacers after yet another win, this time on the road, 104-96. Jaylen Brown had himself a night and led the team with 23 points on 8 of 9 shooting and 7 rebounds, while Kyrie Irving served as the closer with 19 points, 10 assists, and 5 rebounds as he played his best ball with the game on the line in the 4th.

Tyreke Evans paced the Pacers with 19 points off the bench on 6 of 10 shooting. Bojan Bogdanovich chipped in 15 points, 5 assists and 4 rebounds and Myles Turner scored 13 points to go along with 7 boards in the losing effort.

The Celtics dropped a cool 41 points in the 1st quarter, stretching out a 15-point lead in the 1st half, but the Pacers fired back and went into the break with the advantage.

Brown was the guy for the C's early, as he didn't miss a shot from the field through three quarters and led the team with 20 point lead heading into the 4th:

Irving got rolling in the 4th, with a flurry of plays that went beyond just scoring the basketball. He domintated the ball for the C's, scoring when neccesary but distributing the ball as well, inlcuding a pair of dimes to Al Horford when the game was tight. But of course he couldn't help but drop mix in a highlight-reel bucket of two:

Behind Irving's late run the C's ran away with the game and will look to close out the series on Sunday in Indiana.

Watch: Smart's making progress, getting up shots - but still weeks away