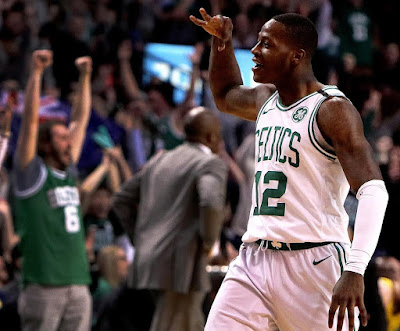 Boston Celtics backup point guard Terry Rozier III tallied 4 points in Wednesday night's Game 2 victory against the Indiana Pacers, but that's just proof that numbers don't tell the whole tale. While Kyrie Irving and Jayson Tatum will get the lion's share of the praise (rightfully so), Rozier was undoubtedly heroic in his own ways for the Cs at home.

Channeling his inner Marcus Smart, T-Ro was an absolute menace on defense, wrapping up Indiana's guards like a wet blanket during his 21-minutes, especially so during the 16-0 run that more or less sealed the deal for Boston.

“That’s one of the advantages of playing a little bit lesser minutes, is you’ve got more energy to do stuff like that. And when we’re at our best, he does a good job of that. And he was huge in that comeback, way more than the stats.”


As the old NBA adage goes, it's a make or miss league. And while Rozier didn't do a lot of making (he also only took 5 shots), he did a lot to make sure Indy did some missing - particularly in crunch time.

That's what basketball is all about. Everyone on the team leaving egos at the door, getting in the game and doing their part to get a W.

Most importantly, that's what Boston Celtics basketball is all about.

I, for one, and happy to see the Celtics finally finding their way. Hopefully that'll continue tonight as the Celtics take on the Pacers for Game 3 in Indianapolis.

What do you think of Rozier's contributions? Let us know in the comments below.