The Clash of the Titans: Ojeleye vs. Giannis 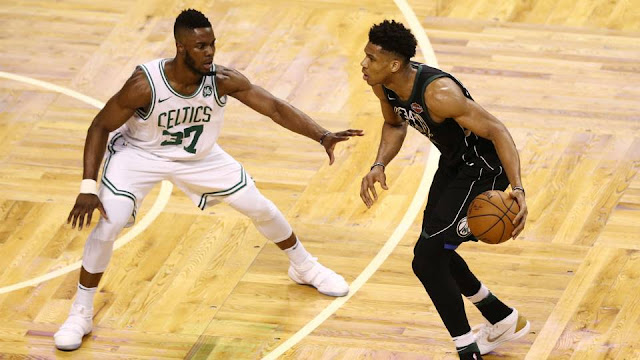 It's official: the Boston Celtics and Milwaukee Bucks will once again face each other in the playoffs. This time, however, there are a few changes. First off, the Bucks now have home court advantage as they not only held the best record in the East, but the entire NBA overall, tallying an impressive 60-22 record.

The Celtics will finally have Kyrie Irving and Gordon Hayward at their disposal. Sadly, our defensive anchor and all out hustler Marcus Smart likely won't see any time while recovering from his torn oblique.

The Bucks will also be without the services of former Rookie of the Year and highly-underrated guard Malcolm Brogdon for at least the first 2 games of the series, possibly longer. Milwaukee has, however, added some towering firepower to stretch the floor, with big man Brook Lopez shooting the best clip of his career for the "deer." Lopez, additionally, has helped the Bucks be absolute defensive menaces in the paint, protecting the rim at an impressive rate. They also added Nikola Mirotic at the trade deadline from the New Orleans Pelicans, a prolific, albeit streaky three-ball shooter.

What's all this added shooting mean for the Bucks? More spacing. Which means more room for The Greek Freak -- Giannis Antetokounmpo -- to operate in the paint. Giannis, for obvious reasons, is the X-Factor in this series. If Boston can hold him to statistical games that mirror a mere mortal, we'll be fine. If we let him get Freak-y, we're screwed.

So, who's going to attempt to guard Giannis? Aron Baynes? Clearly, he has the stones and the physique to do so, but lacks the quick feet to stay in front of him. Al Horford? Big Al can hang with anyone for stretches, but Giannis is too damn long and shifty for Horford to hold him off.

Who then? Who will take on the monumental task of, at the very least, attempting to slow down the man whose roots likely originated from Mt. Olympus?

A cacophony of thunderous sounds begin to echo throughout the Red Auerbach center. Is it thunder? Lightning?

The earth-shaking bellowing ceases. A calm breeze fans nearby reporters as the door to the Celtics practice facility opens. Second-year goliath Semi Ojeleye steps out. Dripping in equal parts perspiration and determination, Ojeleye once again was a maestro of monsterous proportions, slamming the ever-loving you-know-what out of a medicine ball against the concrete wall inside the facility.

Why? It's part of his workout regimen.

Why? To stay fit.

Why? To perhaps exercise his frustrations for a lack of playing time.

Why? He's preparing for the Clash of the Titans - him vs. Giannis. Semi's concrete-wall-attack workout reminds me of one of the classic martial arts flick "Kickboxer," when Jean-Claude Van Damme's character, much to his horror, discovered who his brother would be fighting in the ring.

After 100 physics-defying medicine ball throws that could register on the Richter Scale, Semi laughed off his legendary sweat sessions as nothing more than putting his work in.

“I’m just listening to music and really it’s -- I feel like, during the game, I didn’t get that work in. I didn’t help my team. So I’m trying to catch back up. Just trying to prepare for the next opportunity.”


The man with muscles as deep as the Atlantic and dense as the Grand Canyon, Ojeleye (which I'm sure is Celtic for "man made of concrete") is sure to have his chance guarding the Freak again.

Per NBC Sports Boston's Chris Forsberg, Semi has held his own against Giannis.

The pair logged 41 minutes together on the court during the Celtics-Bucks regular-season matchups this year. Antetokounmpo’s net rating with Ojeleye on the floor was minus-4.5, then spiked to plus-7.4 in the 66 minutes he played without Ojeleye on the court. Now, that’s a bit misleading because the Bucks had an offensive rating of 108 in the minutes Ojeleye was on the court and that actually plummeted to 97.1 without him, so the variance was more on the defensive end.


Stats matter, of course. Especially today as we continue to live in a sports world of advanced analytics, where "eye tests" have been replaced by pluses and minuses and more acronyms than a medical journal. But there comes a time when analytics don't matter. When X's and O's have no bearing. When it's just an old-fashioned street fight where desire and fortitude reign victorious.

I think this series, [Ojeleye will] probably get an opportunity here. His ability to space the floor and make an open shot, but then also to defend. And he defends Giannis, and defends at a high level -- he’s a great weapon that we have.

The question is whether Head Coach Brad Stevens will go into his arsenal to unleash Semi. If so, hopefully Semi will be able to rattle Giannis as he does the concrete back in Boston. Time will tell.


How do you think Semi will fair defending Giannis? Let us know in the comments below.