Irresistible force vs immovable objects: the Xs and Os of Cs - Bucks


To say the Boston Celtics will have their hands full guarding the Milwaukee Bucks is a pretty big understatement, but thankfully that's not the end of the story of the Eastern Conference Semifinals.

Boston fans are collectively tired of explaining to fans and analysts of other teams how the Cs' system defense of Giannis Antetokounmpo forces him to be a jump shooter, but even given the fact that Boston is arguably better than any other team at slowing down the likely 2019 NBA Most Valued Player, the rest of the team (and its coach) are considerably improved from last season.

The Bucks and Celtics are both down a key rotation player in Malcolm Brogdon and Marcus Smart respectively, and while the argument can be made that what Boston needs to win against Milwaukee is impacted less by the loss of Smart than the Bucks by Brogdon, the latter player will likely return sooner in the series than the former, likely canceling out any advantage if the series runs long. 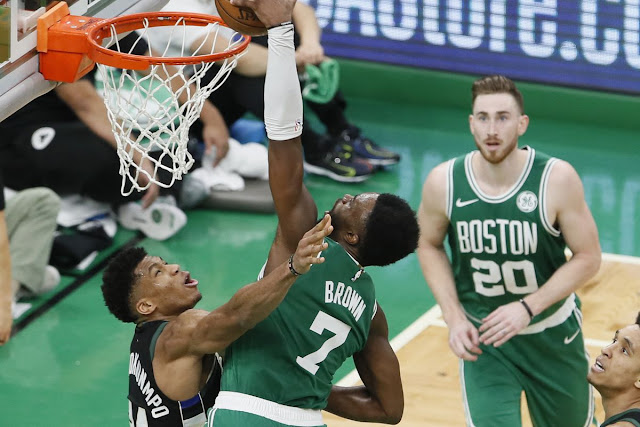 Given Al Horford and Semi Ojeleye will be handed the primary task of slowing Giannis, the Celtics' starters will have to make some decisions. Should they go all-in on defense, and hope the players they have on the floor most of the game can pull out the W with enough offense to overcome the Bucks? Or should they hold true to the original concept of assembling an offensive juggernaut capable of burying Milwaukee from deep before their vaunted assault can take shape?

In truth, I think it will be the latter, as their opponents' propensity on both ends of the floor suggests you might as well go with the strategy that gives you more points when you're hitting - switching to a defensive-minded lineup on nights when the team is cold will always still be on the table.

Think the best strategy vs. the Bucks is let them jack it from 3- maybe you get a cold shooting night. Would also note that in the Celtics best defensive performance vs. the Bucks this year, the Bucks took more 3s than they normally do (40 per 100 poss vs. 37 normally and missed)
— Krishna Narsu (@knarsu3) April 15, 2019


Key factors to consider will be dealing with Khris Middleton, Brook Lopez, and Niko Mirotic from the perimeter while deploying the tried-and-true Greek Freak Tweak (this nickname for the Cs' deployment of Al and Semi should probably never be used again, apologies). I expect Jaylen Brown on Middleton, Jayson Tatum on Mirotic, and a mix of Aron Baynes, Marcus Morris, and possibly even Gordon Hayward based on how big and what way coach Mike Budenholzer chooses to play.

If the regular season (and Bud's entire career) is any clue, I expect Baynes to get a lot of play, but coach Mike could surprise us if he drops one of the first two games of the series to the Cs -- likely key to Boston having a real shot at taking the series. We could see Antetokounmpo shifted to the five with just shooters around him, or perhaps something entirely out of the box. But no matter what ends up happening, it's going to be one of the most anticipated series of the postseason.

Who do you think will start for Boston, and who will they guard? What are the Celts' biggest advantages and weaknesses? Let us know in the comments below, and check this week's CL Pod for a more extended conversation on this very topic.