Magic Johnson steps down as Lakers President without notice


Well, that was unexpected.

The "that" I am referring to is the sudden, unexpected resignations of the Los Angeles Lakers' head honcho, Magic Johnson. 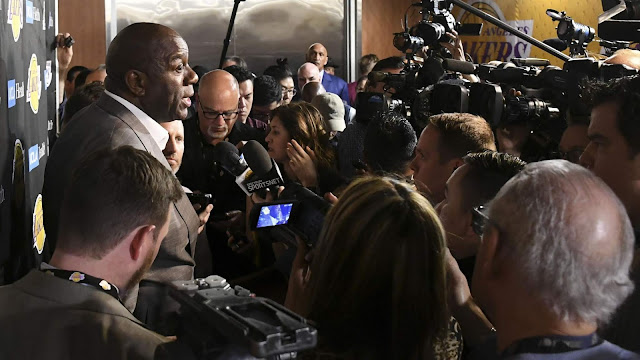 Johnson, who gave no clues to anyone he was planning on stepping down from the organization, assembled an ad-hoc press conference to announce his decision in the wake of a disappointing season for the Boston Celtics' oldest and greatest rival.

Citing his displeasure with the failures, the league's tampering rules and his difficulty staying on the right side of them, a nebulous mention of "backstabbing" and his lack of desire to fire current head coach Luke Walton, Magic left the organization tonight in shock just as they need to make some of the more important decisions in recent years if not decades.

On one hand, kudos to the man for being straightforward, but in terms of logistics, this is looking like yet another disaster based in flash over substance, and could set the organization back years, potentially wasting the signing of LeBron James.

Magic Johnson shocks - well, everyone - and announces he’s stepping down as president of the Lakers. Says he’s not yet spoken to Jeanie Buss to tell her. Says he’s sick of tampering rules, he’s tired of the “backstabbing” & says he didn’t want to disappoint Jeanie by firing Luke. pic.twitter.com/m50VKQmmDR
— Rachel Nichols (@Rachel__Nichols) April 10, 2019

While I relish a return to the days of Lakers-Celtics finals (and winning them), I can't say the schadenfreude won't bring a fair share of joy to many a Cs fan this evening and this summer.

This game never sleeps, man - and never, ever ceases to amaze.