Celtics bench rallies back to beat the Wizards in season finale, 116-110 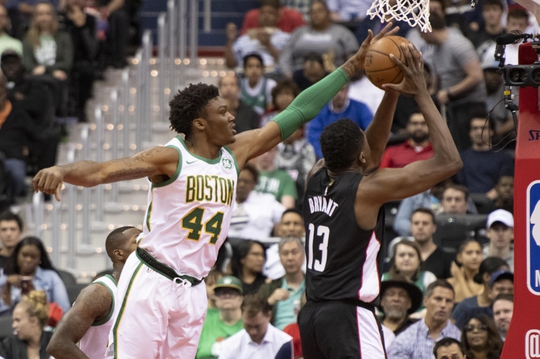 The Boston Celtics closed out their regular season with a bench-fueled road victory over the Washington Wizards, 116-110. Terry Rozier led the way for the C's, scoring a team-high 21 points on 8 of 15 shooting (4 of 8 from three) with 4 rebounds and 4 assists. It was an even-keeled effort on offense for the Celtics with seven different players scoring in double-figures. Jaylen Brown returned to the lineup with 15 points while RJ Hunter, Guerschon Yabusele and Brad Wanamaker each scored 17.

Hunter was particularly effective in the 2nd half as he helped rally the C's back from a 22-point deficit:

For the Wizards, Bradley Beal scored 16 points in just 17 minutes before leaving the game, and Tomas Satoransky lead the team with 19 points, 5 assists and 4 rebounds while shooting 6 of 8 from the floor and a perfect 3 for 3 from deep.

The loss caps off a disappointing season for the Wizards in which they lost their star, John Wall, early in the year while also providing a nice chance for some of the Celtics unheralded bench players a chance to shine before the postseason run begins

Related: Help us solve the Celtics "Pass the Torch" mystery