Luck of the Irish as Celtics get Pacers in Round 1

The Celtics have locked in the No. 4 spot in the East which is far from the lofty heights we had imagined before the season began. Yet, we now know what to expect from a team that looked loaded on paper but appeared almost disinterested at several junctures over the course of the regular season. The oddsmakers at some of the best online sportsbooks like Intertops found all in one place at Sportsbook Review, will certainly deal Boston as a favorite in Game 1 and in the series. And although you can crow all you want about how our boys handled the 76ers in winning three of four regular-season meetings, the fact remains that two of the three wins were too close for comfort with one coming overtime, while their only loss occurred the last time these teams met – and it took place in Boston. In other words, the Sixers are a better team than they were before the trade deadline and should not be taken lightly. 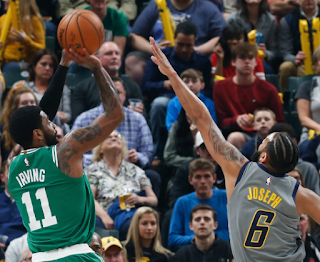 Boston split the season series with the Raptors and dropped two of three against the Bucks. At the lower end of the spectrum, the Celts split with the Nets and were swept by the Magic. If things remain as they are and Detroit lands the eighth and final playoff spot, then sure, you could salivate at the prospect of taking on a Pistons’ team that fell to Boston in three of four regular-season contests. However, eighth-seeded opponents are the reward for conference winners and Boston landed 11 ½ games out of the top spot, with the Milwaukee Bucks claiming the East.

Now that we’ve detailed Boston’s success, or lack thereof, against all but one of the Eastern Conference playoff contenders, we should probably chirp a bit about their actual first-round opponent, the Indiana Pacers. Aside from Detroit, Indiana is the Green’s ideal opponent. The Pacers drew first blood by eking out a 102-101 victory way back in November, but after that is was all Celtics. Boston returned the favor in January by blowing the Pacers out 135-108, then followed that with a 114-112 win March and punctuated the four-game regular season with a 20-point victory last week in hostile territory. Boston’s average margin of victory was 16.3 points, and that my friends, is a stat too important to ignore.

The Celtics ended the regular season by winning six of their last eight while the Pacers dropped five of their last eight with their regular season finale against Atlanta still yet to be played. Indiana has been without their leading scorer, Victor Oladipo, since mid-January and the Pacers don’t expect to see him walking through those locker room doors anytime soon donning a game jersey.

Brad Stevens had the requisite coach-speak response when asked about his team’s first-round opponent, “It’s going to be an extremely tough series. It’s going to be an extremely physical series. I did not think they played their best without Collison the other night.” The Celtics’ head coach tossed another verbal bouquet Indiana’s way when he stated, “That’s (blocking out in the paint) especially important as you get into the Pacers game because those guys crash the glass as well as anybody and make it really difficult.”

Stevens was referring to Indiana’s 20 second chance points off of their 14 offensive rebounds in Boston’s 114-112 home win on March 29th but the fact remains that the Pacers are ranked 24th in rebounding. However, what they do better than any other club in the league is shut down opposing offenses, surrendering 104.3 points per game, ranked first in that category. This series should go no further than six games which would give the C’s a welcome respite before they take on their next opponent. But with this year’s edition, you’re never really quite sure. However, one thing we do have is Kyrie Irving and he could win this one all by himself, but it would be nice if he gets more than a little help from his friends.