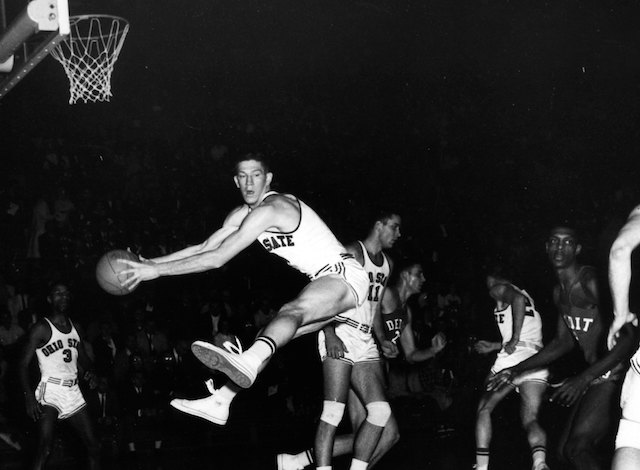 For us Boston Baby Boomers who were growing into sports fans during the 1960’s, there were two milestone moments – the Red Sox’ Carl Yastrzemski-led Impossible Dream 1967 season, and John Havlicek’s Game 7-saving swipe of a certain Hal Greer in-bounds pass two years earlier.

These exploits became part and parcel of the “soundtrack of our lives” due, in large part, to commemorative record albums produced for each occasion … but also because Carl and John (ironically born less than a year apart) were to be cornerstones of their respective franchises throughout Hall of Fame careers.

Carl was very much an “Everyman” – average-sized and normal in most ways, excepting his uncanny hand-eye coordination and exceptional work ethic. He was lauded in the press for pursuing a degree at Merrimack College out in the ‘burbs. But this very uncommon of men plodded along – from left field to first base to the DH role – for 23 Major League seasons at Fenway, including a run of 15 straight selections (1965 – 1979) to the American League All-Star team.

John Havlicek, on the other hand, was Frank Merriwell, the All-American boy, come to life. His Ohio State team had appeared in three consecutive NCAA title games, winning one. (Between 1960 and 1969, this paragon of excellence played in the season’s ultimate game on nine occasions, coming out a winner seven times.) Yet eight players were selected over him in the 1962 NBA draft and he wound up with a team and a coach perfectly suited to his athleticism and all-around game. 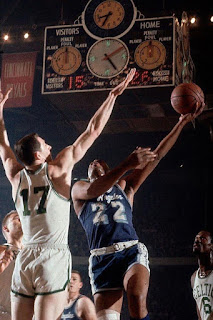 Frank Ramsey, Red’s original sixth-man, was showing signs of wear-and-tear, so the rookie Havlicek logged more time and scored more points while easing into Ramsey’s role. And as for a Sophomore Slump, John’s 19.9 points per game edged out the 19.4 posted by Sam Jones for best on the team.

It would take another two seasons for Hondo to gain All-Star recognition – right after his bally-hooed heist – but he would fashion a streak (13 straight selections) to rival Yastrzemski’s.

At the mid-point of his fifth season in Boston, now playing for Coach Bill Russell, John was appointed Captain of the team, a responsibility he’d capably fulfill through retirement.

The fewest games Havlicek played in any season was 71 (’65-66), the fewest minutes per game he logged was the 27.5 of his initial campaign in green. John’s initiation of Dave Cowens during Big Red’s first two seasons had Hondo leading the league in minutes played, over 45 per tip-off.

But neither usage rate nor ancillary duty would alter John’s super-human tenacity on the court – and certainly not a mere separated shoulder in the 1973 playoffs.

A schlub like me can’t even imagine what facing him on the court – especially for the very first time – might have been like … so allow me to interject the words of basketball historian and former NBA player Andre McCarter from his recent tribute to Mr. Havlicek:

I was in my rookie year in the NBA with the KC Kings (Now the Sacramento Kings), and we were on the parquet floor of the famed Boston Garden to play the Celtics. Phil Johnson our head coach made a decision to call me off the bench and guess who I had to guard John Havlicek. I think Mr. Havlicek helped me get more minutes than normal that game because I could stay near him. We didn't have too many speedsters on our team, the only other speedster besides myself was Brian Taylor. That day it was as if Mr. Havlicek said okay kid let me see if your college coach John Wooden prepared you for this, not game, but track meet! This season was near his end as a NBA player, John Havlicek would retire in 1978, but it did not matter that day. On Offense, he ran North, he ran South, East, West and in circles. All that running led to him getting points off the run. It was an experience I will never forget! No other player I have encountered with my own eyes or played against or with comes close to John Havlicek's ability to keep it moving, his endurance was relentless and he had a purpose! 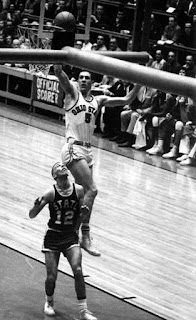 It wasn’t just Hondo’s endurance that surpassed mortal bounds – hell, in certain ways he seemed too perfect, kinda like that older kid from your neighborhood that your Mom always wondered why you couldn’t be more like. Married to his college sweetheart, two perfect kids, his name (as well as his presence) linked to numerous worthy causes. The gym at his high school was renamed in his honor back in 2007.

My favorite image of John Havlicek is from his final game, April 9, 1978 at the old Garden in which he posted a game-high 29 points against Buffalo. As the buzzer sounded, the crowd seemed to rise as one in appreciative adulation. John trotted to center court, threw his arms straight up above his head, and lowered himself in a deep bow to all four sides of the arena. He topped it off with a “victory lap” around the hockey boards before slipping back to the locker room.

The NBA’s 1977-78 schedule-maker must have had quite a sense of humor – the last eight games of John Havlicek’s illustrious career took place in a span of TEN days. John took the floor for all eight and tossed in 141 points for good measure. “Load management,” ‘twould seem, applied only to planes and 18-wheelers in those pre-historic times.

I was unaware that John had taken ill, so his passing was stunning – there was still a part of me that wondered if John Havlicek was somehow descended from the Ancient Greek immortals, suspected that maybe the Midwestern roots were just a smokescreen.

Sadly, that’s not the case, and we’ve indeed lost arguably the best all-around athlete ever to have graced an NBA court..