The Boston Celtics got thumped 123-102 by the Milwaukee Bucks in Game 2 of their Conference Semifinal series. The Bucks bounced back from their disastrous Game 1 performance and tied the series 1-1. Kyrie Irving had one of his worst shooting games of the year (4-18 form the floor), and the Celtics were outscored 89-53 after the first quarter. It may not feel like it at the moment, but Boston got what they wanted with a split after two games on the road. 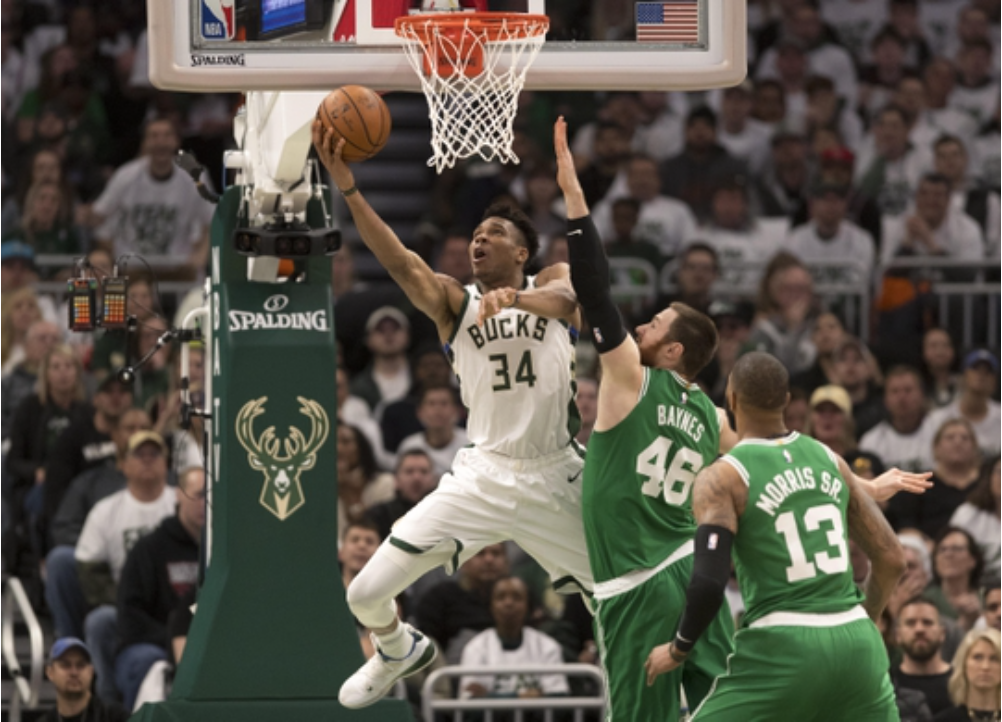 After a Game 1 beatdown, Milwaukee decided to switch up their starting lineup, inserting Nikola Mirotic into the group instead of Sterling Brown.

With Mirotic in the starting lineup, and Brad Stevens sticking with the smaller group that started Game 1, the Celtics had a noticeable speed advantage on the perimeter, and they made sure to attack that advantage early and often. Mirotic ended up guarding Jaylen Brown and picked up two quick fouls that lead to five points in the first four minutes of the game.

The one detractor of starting Mirotic is that he actually has to guard a starter for long stretches. He picked up two fouls on Jaylen Brown in 3:17. Replaced by Pat Connaughton. #Celtics #Bucks

Boston started the game as the aggressor and opened the game on a 12-5 run. Brown led the way with five points, going 5-5 from the free throw line, but every started scored early besides Kyrie. But as has been the case for the Bucks all season, they quickly turned things around and went on a 13-3 run to take a 17-15 lead at the 5-minute mark.

It's no surprise, to anyone that knows anything about basketball, that Milwaukee made their run with Al Horford on the bench. Horford has been the C's most important player throughout the season, and he has continued to come alive and play his best basketball in the playoffs.

With Horford inserted back into the game, the Celtics stemmed the tide and answered the Bucks' run with a 7-0 run of their own to regain the lead. While Horford was continuing to dominate, Kyrie got off to a rough start. He missed his first seven shots and wasn't affecting the game in many other ways. Luckily, the rest of the Celtics were carrying the load, which allowed Boston to take a 30-25 lead at the end of the first quarter.

Boston closes out quarter with 8-2 spurt, lead 30-25 after 1Q. Morris, Horford with 7 pts each for #Celtics. Middleton leads the #FearTheDeer with 9 pts, Antetokounmpo has 5 pts (all from the free throw line).

Khris Middleton, who had a subpar Game 1 by his standards, led the charge for the Bucks. He had nine points on 3-6 shooting and five rebounds in the first quarter.

The Bucks turned up the intensity early in the second quarter and Giannis Antetokounmpo made his first field goal count with a loud, semi-transition dunk to get the crowd going. Even with this increased compete factor, the Bucks were only able to shave one point off the Boston lead. With Kyrie on the bench, the Celtics will take that every day of the week.

When Horford went to the bench once again, the Bucks went on a quick 10-0 run to take a 4-point lead. Middleton was right in the middle of the run, knocking down back-to-back threes to force a timeout from Stevens and Co.

Khris Middleton still has never missed against the Celtics in the playoffs. Not once, no matter what the stats say.

Despite spurts of Milwaukee looking like the team that led the NBA in wins during the regular season, Boston answered each run without blinking. With a burst from Middelton and Giannis giving the Bucks the lead, the Celtics answered back with a 10-2 run of their own to regain a 2-point lead. Kyrie finally found his way into the scoresheet with five quick points, and Marcus Morris (17 points) knocked down a three.

Big 10-2 Celtics run with Horford on the bench to take back the lead.

The Celtics couldn't carry that momentum through into the halftime break, though. The Bucks ended the half on a 13-4 run and took a 59-55 lead into the locker room. You knew that the Bucks would come out with more energy than they did in Game 1, and, for the most part, the Celtics did a good job of matching it. All things considered (Kyrie going 2-12 from the field), the Celtics had to be happy to be losing by only four points at the break.

So this is how we started the third quarter...

Are you kidding me, Jaylen? pic.twitter.com/kFzKD879m9

The Bucks, who stole momentum away at the end of the first half, got a number of open threes, including two more for Middleton, to go early in the third quarter and opened up a 10-point lead, their largest of the game. The defensive communication looked off, leaving the hottest player in the game open more than once.

Brutal defensive communication by the Cs there, leaving Middleton wide open in the corner for a 3. Horford wasn't pleased.

Boston answered once again, even getting the lead down to three, but Milwaukee responded with seven unanswered points to drag the lead back out to 10. Nothing the Bucks were doing on defense was causing problems for the C's, they just weren't hitting their shots. They also got a little lazy on the offensive end, and weren't working the ball around like they had been early in the game.

With Giannis being Giannis, the rest of the Bucks making shots, and the Celtics not making any, Milwaukee pulled away in the third quarter. The Bucks closed the third quarter on a 24-2 run, yes, you read that right, and took a 25-point lead into the fourth.

The fourth quarter was trivial. The Celtics never got the lead under 20 points and spent most of the time fighting off a 30-point deficit. There wasn't anything good that could be taken from this game. Just one of those nights where the Bucks hit all of their threes (18-39 from three) and your shots didn't fall. The Bucks dominated every aspect of the game, and played like they wanted the win more than the C's, which they did.

The Celtics did their job in Milwaukee. They split the two games and took home court advantage from the Bucks. It doesn't feel like a positive after a beatdown like this, but the C's need to regroup and protect home court come Friday night. Remember, Boston is in good shape.