In Game One's victory versus Milwaukee, the Celtics dominated in the third quarter. Not so in Game Two's loss. The Bucks used a sluggish third period performance by the guys in green to go on a run and take the game. 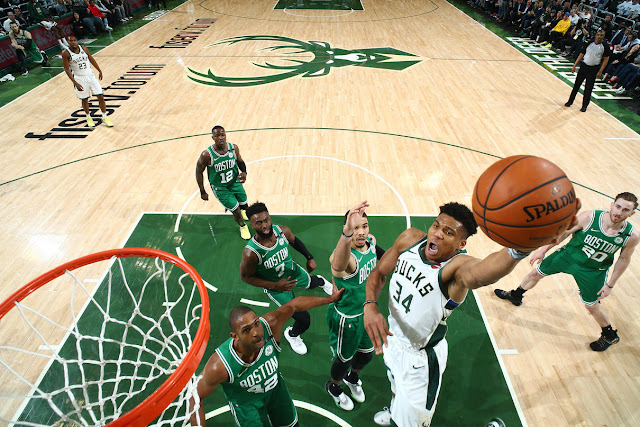 Now to last night - end of the first half - Milwaukee up by four points, 59-55. Then the horror show began. During the final 7:06 of the third period, this is what took place:

After maybe the worst playoff game of his career, Kyrie Irving listed off ways he needs to be better. Now the guy, he knows the Celtics need more from him.

So where does the blame lie? Unlike Game 1, free throw attempts were close, 27 for Boston, 31 for Milwaukee. Rebounds? Yes, the Celtics grabbed 45 to the Bucks 54. That was a factor. Any blame on Kyrie Irving? Frankly, he was due to have a bummer. Every star has them - no exceptions. He will rebound in Game 3.

Was it the Milwaukee night life? I have no idea, but this is stuff that happens, and we hardly ever hear about it. I discount nothing, but there are a few things we know:

1.) The guys in green are coming home for the next two games.

2.) Prior to Game 3, if I don't see and hear one of the most raucous celebrations of the life and career of the beloved John Havlicek, there will be many disappointed fans.

3.) And since the third quarter has been so important thus far, a brief reminder of Jarrin' John's energy and determination prior to taking the court for the second half would be opportune.

4.) A glitch for Game 3 may be that the Bucks Malcolm Brogdon returns from a foot injury. Like Marcus Smart for Boston, Brogdon does all the little things to keep the Bucks focused.

5.) And speaking of that, last night was a reminder that we need Marcus Smart out there. He never allows his team, or himself, to let down. I think, some forget that until we experience a loss like last night's. Hopefully he returns soon.