Brogdon, Smart both out to start Bucks-Cs; could injuries tip the series?


With news finally beginning to trickle out that Milwaukee Bucks guard Malcolm Brogdon is finally looking like he'll be getting back on the court, the question of how each team in the Bucks-Boston Celtics second round series will address injuries to key players are starting to surface as well.

As Marcus Smart has begun showing signs of progress dealing with his torn oblique, many (including yours truly) have pumped the brakes a bit for those among us hoping to see Smart back any time soon, particularly with the week of rest the Celts are getting for having dispatched the Indiana Pacers in just four games.

Thing is, though, that Marcus would be getting that rest regardless, and with the Bucks finishing their own sweep of the Detroit Pistons, we're not really looking at any extra healing time for Marcus. The good news is he anticipates being able to run in about two weeks. 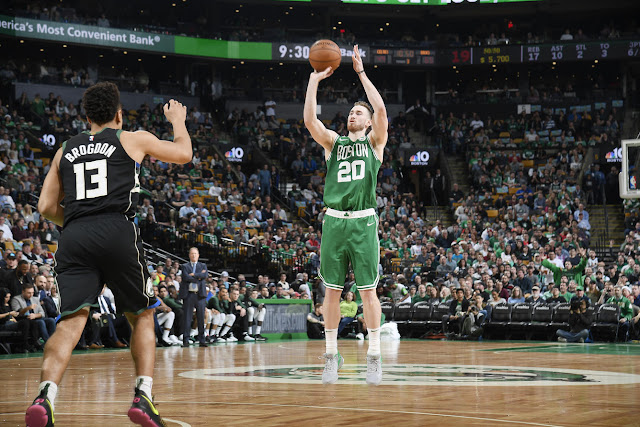 The bad news is that's the bare minimum to be an effective basketball player, and we'll need a lot more five or six games into a series with Milwaukee if he steps on the court by then.

On the other side of the ball, one-time Rookie of the Year Brogdon, who tore his plantar fascia this March, is also being rumored to resume basketball activities, but with an asterisk the size of the sun.

Malcolm's return date should, according to coach Mike Budenholzer, be known in three to five days, and he hasn't done any live practicing yet.


My guess is he's still about ten to 14 days out, putting him more or less on the same timeline as Smart, with an injury capable of slowing an NBA player just as comprehensively as a torn oblique - turns out, doing things with your lower body is kind of important in this league.

For Boston, Smart's absence is a bit of an issue with Brogdon able to play, as they don't really have a place to hide Kyrie Irving on defense otherwise. But with Brogdon out, Sterling Brown and Pat Connaughton have been seeing big minutes, and should be no issue whatever for Irving, leaving Jaylen Brown, Terry Rozier, and Semi Ojeleye in particular available to cover other players.

Ultimately, it won't be injuries, though, that decide this series. To date, Boston has developed a highly effective defense to counter Giannis Antetokounmpo's driving game, forcing him (and the rest of the team) to jump shoot against one of the league's top perimeter defenses. Should Budenholzer figure out a counter -- or Giannis find his stroke -- Boston may find themselves up a particular creek with no paddle without a counter-adjustment of their own.