It really makes sense. For the past two playoff games versus the Pacers, Coach Brad Stevens has gone with his three All-Stars (Kyrie Irving, Al Horford and Gordon Hayward) and the Jay-Team (Jaylen Brown and Jayson Tatum) as his closers. That quintet has the size for Brad's switching defense, and they can all score and rebound. We will certainly see Marcus Smart, Terry Rozier and Aron Baynes in there in the closing minutes in some situations, but that five-some should work best for most end-of-game situations. 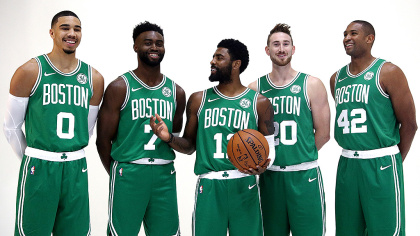 Kyrie on going back to Kyrie/Hayward/Horford/Jaylen/Tatum group that we all expected: "We just had time just to figure it out. Now that the stakes are at their highest, the pressure, I feel like we’re settling into who we really want to be, and that’s just an overall great team."

We really didn't see these five close out games early in the season because of injuries and Gordon's continuing recovery. But this is playoff time - Gordon looks healthy, and Jaylen and Jayson have returned to last-post-season form.

“They were elite defensively,” Brad Stevens says about our Opening Night starting lineup, which has been used recently at critical moments. “They just had to figure out how to play well together.”

If you remember, the Hayward/Tatum/Brown/Irving/Horford lineup opened the season as the starting five. As Brad stated, they just had to learn how to play together. Upon Marcus Smart's return from injury, I still feel he makes sense as a starter. So does Baynes. But with the game on the line and the clock winding down at the end of games, Stevens has faith in this Quality Quintet to get the job done, and it is hard to argue with that.