Al Horford is the axis Boston's playoff success orbits, and it shows


While they might not give out hardware for team-specific Most-Valued Players, if the Boston Celtics had to choose someone, my vote would be for Al Horford.

If you haven't figured out how important the man is for Boston's overall schema by now, I'm not going to bother to make that case - we've seen the results this season and prior when he sits, and the results are not ambiguous. 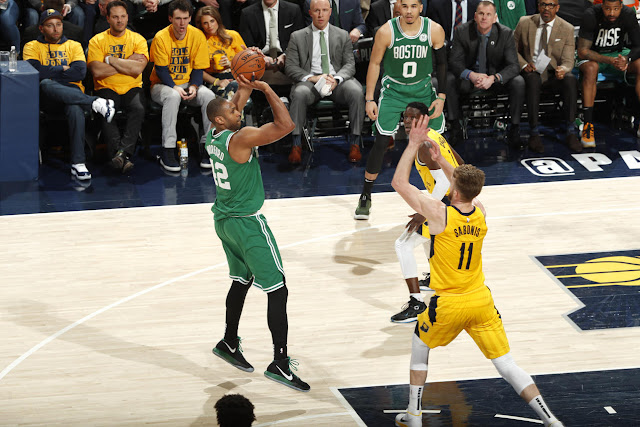 But I'm not here to talk about the regular season -- it's the postseason impact of Al I'm after. Over the first three games of their series with the Indiana Pacers, Horford has been nothing less than transcendent.

The Celtics are 29.8 points per 100 possessions better with Al Horford on the floor through three playoff games, per @cleantheglass.
— Tom Westerholm (@Tom_NBA) April 20, 2019


Glancing at the counting stats, as per usual with Al, would diminish his impact, as he's logging a respectable-if-not-eye-popping 10 points, 9.7 boards and 4.3 assists per game.

But, looking deeper, Horford has been putting up treys at a sizzling rate of .400 while also managing a defensive rating of 90 -- sixth best in the league among players playing 15 minutes or more per game, and the only player on that list besides Kenneth Faried not a member of the Milwaukee Bucks.

Boston has played an absolutely colossal 29.8 points per 100 possessions better with Al on the floor, too, if you like your stats in a more team-offense context, while we're at it, but just watch the video above if you're of the eye-test variety -- Horford's impact and importance for the Cs is simply undeniable.

If we're going to have a shot at getting past the Bucks without Marcus Smart, let's hope Al keeps averaging these kinds of numbers.