The Boston Celtics stepped on the court this Easter afternoon with an opportunity to close out the Indiana Pacers on their home floor, and perhaps get a jump-start on resting up for a likely grueling series with the Milwaukee Bucks in the second round of the 2019 NBA Playoffs.

The Pacers, however, had no intention of going down easy in this potential elimination game. The opening tip belonged to Indy, but the Celtics hit first with an 8-0 run, forcing an early timeout with less than two minutes played. 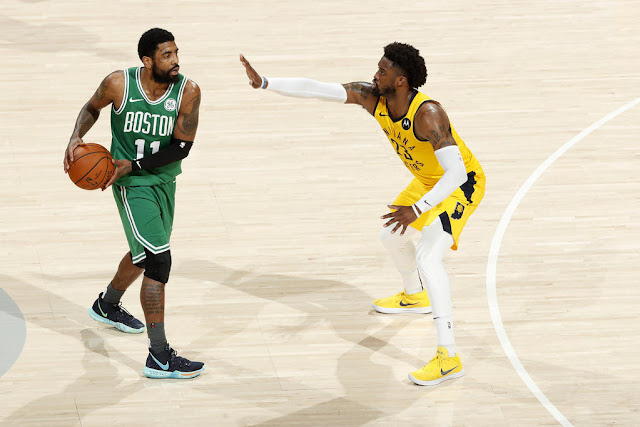 Whatever happened in the huddle worked, as the Pacers responded with a 13-0 run of their own, fueled in part by some sloppy play by Boston. The draught was broken when Kyrie Irving got himself to the charity stripe at the 6:30 mark, and both teams began to play more loosely with Jayson Tatum and Gordon Hayward heating up for the Cs.

Kyrie takes a seat on the Celtics bench after taking a shot to the ribs on a Myles Turner screen. pic.twitter.com/0dSqlowe1a
— Taylor Snow (@taylorcsnow) April 21, 2019


Miles Turner was a menace on both ends of the floor, blocking shots and dunking on the Cs before hitting Irving hard on a pick, forcing him to the bench to collect himself. On the next play, Marcus Morris Sr. contested Tyreke Evans at the rim and fell to the ground for a moment, but was able to continue.

Indiana tried doubling Tatum several plays later, only to see an aggressive Gordon Hayward take the pass and dunk it, cutting the Pacer's lead to two to close out the frame.


Indy opened the second quarter giving up a bucket to Morris, and Boston briefly retook the lead on a pair of free throws by Al Horford before the Pacers tied it up at 25 behind a Corey Joseph basket. The Cs would build themselves a bit of a cushion when Horford nailed a jumper and Terry Rozier a dunk to force an Indy timeout.

The Pacers couldn't find some O before Scary Terry would throw up a floater that hit, frustrating the team and forcing an offensive foul before Terry would hit a trey for good measure. Evans answered back with one of his own, but Mook did as much with a two-point jumper, putting the score at 36-28 at the 7:30 mark.


Domantas Sabonis and Evans helped Indy claw out of the hole, aided by Thaddeus Young and a trey from Wesley Matthews, getting to within three several times only to see Boston answer back.

Sloppy play by the Cs in the last two minutes allowed the Pacers to claw their way back into the game however, with Indy taking a two-point lead of 49-47 into the half.


The third frame began with the Pacers quickly extending their lead to five despite a tip-in by Aron Baynes, and Indiana threatened to make a big run until Horford stopped the bleeding with a trey from the top of the key at the nine minute mark.

A fancy layup by Bojan Bogdanovic gave the Pacers a 60-54 lead soon after, but Morris hit a contested jumper only to see Matthews answer back with a trey. Jaylen Brown gave one back of his own, followed by another by Hayward to pull the cs within three.


Gordon would unleash a furious dunk waved off after a Baynes offensive foul, Kyrie would pull Boston to within one on a driving layup soon after, and Mook would give Boston a 73-72 lead to end the quarter.

The final frame began with a T-Ro three, but the game stayed close with each team trading shots or free throws on alternating possessions.


Sloppy play and an offensive draught for both teams made for some unwatchable basketball over the next few moments, culminating in a questionable block by Corey Joseph on Tatum that nearly knocked him off his center of gravity, hitting Jayson in the head while airborne.

The play was ruled a flagrant one as it should have been, but the sloppy play continued with Boston taking a two-point lead with Jayson hitting both his free throws. A Horford trip to the stripe and Mook three pushed the lead to 87-83 Cs with five minutes remaining.

Hayward added to the lead with an and-1 drive, but gave two right back with a shooting foul on Bogdanovic on the next play, but made up for it with a three on the next play, and Tatum slammed home a dunk as punctuation the play after that.

Indiana fought valiantly, trying to regain some momentum as the clock wound down on their series and season, but found little left in the tank, losing 110-106.

The Celtics will likely face the Bucks in the next round of the NBA Playoffs barring a record-breaking comeback from the Detroit Pistons, likely to start about a week from today.