The Boston Celtics haven't even met the 76'ers in the playoffs this season, but the Boston/Philly feud (it may go beyond rivalry now) is in play. After a hard foul by the 76'ers Joel Embiid on one of Dudley's Brooklyn teammates, Jared shoved Joel - at which time a melee broke out on the court and into the stands. Dudley never played for the Celtics but he spent four years with the Boston College Eagles as a starter before heading to the NBA. 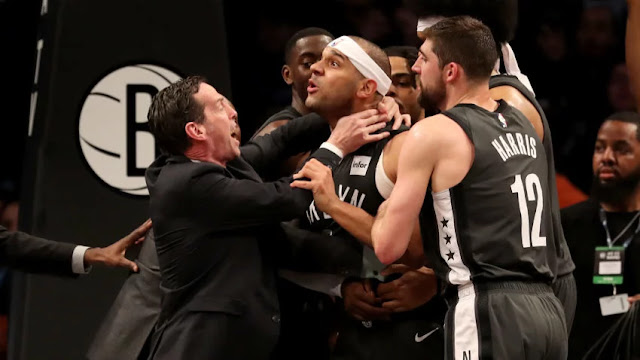 Neither Jared Dudley nor Jimmy Butler deserved to be tossed yesterday. But I have a suspicion referee Ed Malloy came to a decision that’s somebody’s got to go as he himself was shoved two rows into the stands.

Both Dudley and the Sixers' Jimmy Butler were tossed, and Embiid was hit with a Flagrant 1 foul. No one knows yet if the Celtics will meet Philly in this year's post-season, but it is good to see the Boston/Philly feud is alive and well.

Joel Embiid has some thoughts after Dudley got in his face. pic.twitter.com/lVcmTuLQsd

So Embiid calls Jared Dudley a "nobody". The heat of battle must have sent the blood pouring from his brain to his muscles. Jared is a graduate of Boston College and is in his 12th season in the NBA. And Dudley kept the Celtics/76'ers squabble active until, of if, the two teams meet this off-season. That definitely makes him "somebody" to us.