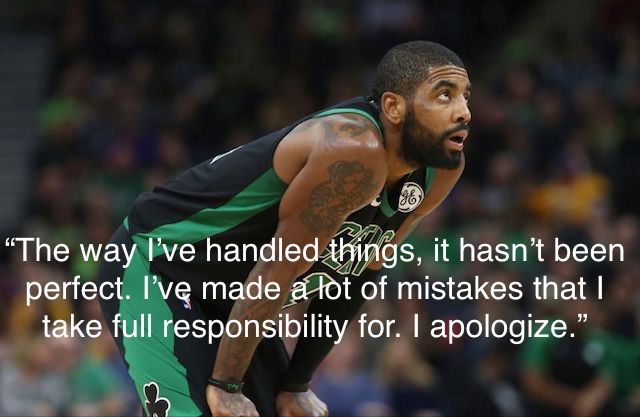 Yahoo Sports Chris Haynes was able to get Kyrie Irving to open up about his rather tumultuous recent encounters with the media.

“The way I’ve handled things, it hasn’t been perfect. I’ve made a lot of mistakes that I take full responsibility for. I apologize. I haven’t done it perfectly. I haven’t said the right things all the time. I don’t want to sit on a place like I’m on a pedestal from anybody. I’m a normal human being that makes mistakes. For me, I think because of how fixated I was on trying to prove other people wrong, I got into a lot of habits that were bad, like reading stuff and reacting emotionally. That’s just not who I am.”

“I’m still learning, bro. I come from a suburb of New Jersey. I’m not used to all this [attention].”

The All-Star guard was roundly criticized last week when a clip circulated of him walking into an arena in which he was met by cameramen and he was heard saying, “I’m not going to miss this [expletive] when I’m retired.”

His critics, which included retired players, quickly pointed out that he didn’t have a problem using cameramen and social media to help promote his “Uncle Drew” movie.

“My [Uncle Drew] character, I never took any acting classes. I didn’t put any extra work into it. It was just something I was able to do and it became this,” he told Yahoo Sports. “Look, I respect the ones that came before me, but they didn’t endure social media, the 24/7 news cycle. [NBA commissioner] Adam Silver was right; it really affects people in different ways. These are just different times. People are dealing with anxiety, depression and other disorders that affects their well-being. Some people can’t handle all of this, and we need to be mindful of that.


There's a lot more quotes from Kyrie if you click the link above as well as a length video of Haynes discussing the conversation he had with Irving. It's good to see Kyrie taking a much more positive approach on this west coast trip nd do some self reflecting as well.