Is it time for Isaiah Thomas to come back home to Boston?


Isaiah Thomas' production in six minutes of play last night was far from what the crowd in attendance remembered from him, but the love and adulation was what he sought from them. And he got a lot of both. 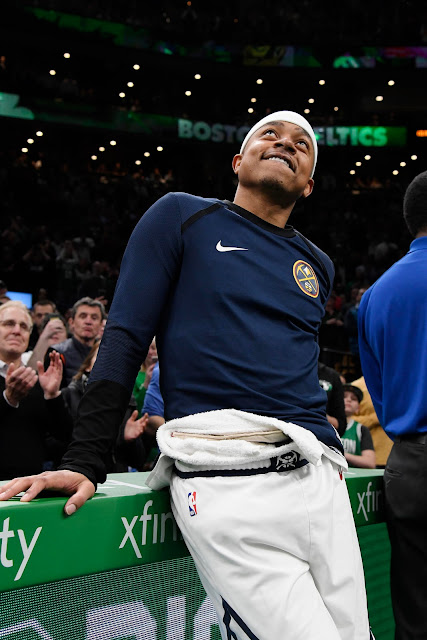 Isaiah missed both of his shots - passed off for two assists - and committed one turnover in Denver's 114-105 win over the Celtics. He appears to be close to fully recovered from the hip surgery, but the rust from his long layoff and recovery remains.

New: “This type of love was something that I wanted, something that I needed.” Isaiah Thomas does not have his magic back yet, but for a night Boston tried to remember the time that he did: https://t.co/It5PxV1AFU

IT's future remains in doubt. He will be a free agent this summer - the fabled Brinks truck never backed up for him - and it is doubtful if it ever will. Thomas had the following words on his future (per ESPN's Tim Bontemps):

"I just want a legit opportunity," Thomas said. "Whatever the role may be, it's going to be. But I know I can play at a high level again. And if given the opportunity, I can be an All-Star, I can be All-NBA, I can be all that, because I physically feel great.

From his green and gold sneakers to his reference to Boston as home, all indications seem to be that Isaiah would like another legitimate shot in Boston. His 2016-17 season with the Celtics showed 33.8 MPG, 28.9 PPG, 2.7 RPG and 5.9 APG while averaging 46%/38%/91% on field goals, 3-pointers and foul shots, respectively. That would not happen again in Boston, but that type of capability did not suddenly take a total nose dive.

I am well aware of Isaiah's size and defensive short-comings (no pun), but he uses his lack of stature to weave into, under and around defenders. He was simply a nightmare cover with the ability to drive and finish, hit from distance or pass off to the right teammate at the right instant. With a summer of hard work, which we can be sure he will do, he could come back close to what he was in his last season in Boston.

No one can convince me that a fully-healthy Isaiah would not have been an asset when the Celtics were struggling early on this past season. He has shown us that his mental toughness is unquestioned. Danny Ainge will most likely at least consider adding Isaiah to the mix this summer, and that could be a wise move. I can picture him substituting for Kyrie Irving and coming off the bench as sixth or seventh man alongside a big guard in the form of Jaylen Brown or Marcus Smart.

He would no longer be the star of the show, but he no longer has to be. He just needs to be the quick, darting, unpredictable offensive force that he has previously displayed on the parquet - but only for 16-18 minutes per game. Red Auerbach brought back Don Chaney for a second Celtics stint, and Danny even brought back Antoine Walker for another go with Boston. Isaiah talked about "the best situation for me and my family", and that just might be back home in Boston.