The Boston Celtics up away the Cleveland Cavaliers late 116-106 to end their four-game losing streak and gain some momentum heading into their final stretch of games. Boston was able to find a rhythm on the offensive end against the league's worst defensive team, and were able to get enough stops in the fourth quarter to secure a much needed win. Let's not get too excited about this team flipping a switch, though, but a win is a win. 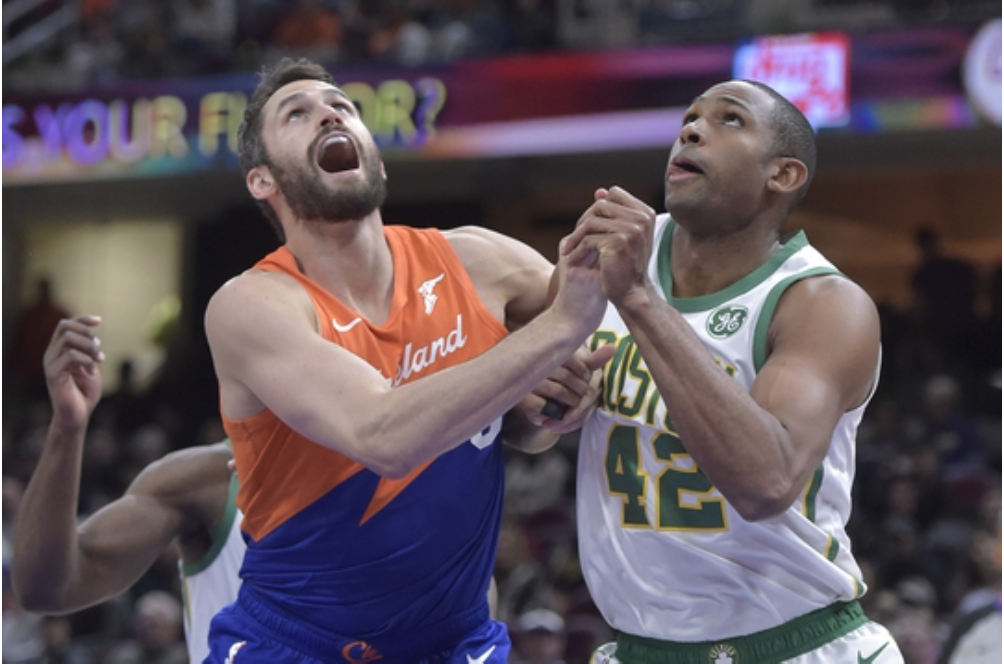 With Kyrie Irving (rest) missing the game, the Celtics, per usual, slid Terry Rozier into the starting lineup. But that wasn't the only change to the starting group. Aron Baynes replaced Marcus Morris, presumably to match up with the big front court of Cleveland.

Marcus Morris, now coming off the bench, gets a steal and score in his first minute. #Celtics #Cavaliers

Having lost four straight games in increasingly frustrating fashion, you would have thought that the C's would have come out of the gate with the necessary intensity, but after watching the first few minutes, that wasn't the case. Some bad shot selection and a few sloppy turnovers certainly scared Celtics' fans into thinking that this could be another embarrassing performance.

But after the dreary start, Jayson Tatum really picked up the pace. Tatum got a few early shots to go at the rim, and then started to cook fools all over the court. Inside and outside, lucky bounces, Tatum had everything going in the first quarter, and finished the frame with 14 points.

Gordon Hayward, who looked good in his return from concussion protocol against the Spurs on Sunday, continued his solid play early against Cleveland. In his first 10 minutes, Hayward had six points on 3-4 shooting to go along with three rebounds and two assists. The stats don't jump off the sheet, but if nothing else the Celtics should use these last handful of games to get Hayward right heading into the playoffs.

With the Celtics getting better looks on the offensive end and moving the ball much more efficiently, the group looked more together than they had in their four-game losing streak. While the offense was humming, the defense, which has been tragic at times throughout the season, was not getting many stops. The Baynes-Al Horford front court certainly helped Boston compete with Kevin Love and Tristan "I Swear She Came Onto Me First" Thompson on the boards, it wasn't very effective in improving the overall defensive performance.

After letting Cleveland back into the game, thanks in large part to rookie Colin Sexton, and even take a 1-point lead midway through the second quarter, the Celtics closed the half on a 7-0 run to take a 57-51 lead into the halftime break.

The Celtics opened the third quarter on a 10-4 run to get a little separation and take their first double digit lead. The Cavaliers answered with an 8-1 run of their own to cut the lead back down to five with just under four minutes to play in the third. But Morris, who had started the game just 1-9 form the floor, knocked down back-to-back threes to right the Boston ship.

Although the Celtics did a good job of answering runs made by the Cavs, something that has not been the case in recent weeks, this game had a very similar feel to the Charlotte collapse on Saturday. Boston let Cleveland hang around, and made a number of sloppy mistakes that showed a lack of focus when adversity hit.

Wow. #Cetlics allow the ball to roll to Collin Sexton to halfcourt and then he takes off and scores a layup in a mere 2.7 seconds to end 3Q. Horrible defense. BOS 88. CLE 81.

Cleveland completed the comeback after tying the game 92-92, but Horford was able to finish a tough layup in the half court, and Hayward followed that up with a transition bucket to open the lead back up to four.

After Cleveland tied the game, Boston took back control and made sure that this one wouldn't slip away. A 14-4 run opened up a 10-point lead with just over three minutes to play. Cleveland had a chance to make things interesting late, with Jordan Clarkson at the free throw line down just six. But Clarkson missed both free throws and Marcus Smart finished an and-1 layup to put the game out of reach.