I broached this idea yesterday in my CelticsLife article. However, instead of starting Greg Monroe alongside Al Horford, Brad went with Aron Baynes to complete the Double-A duo. It worked, at least for one game. 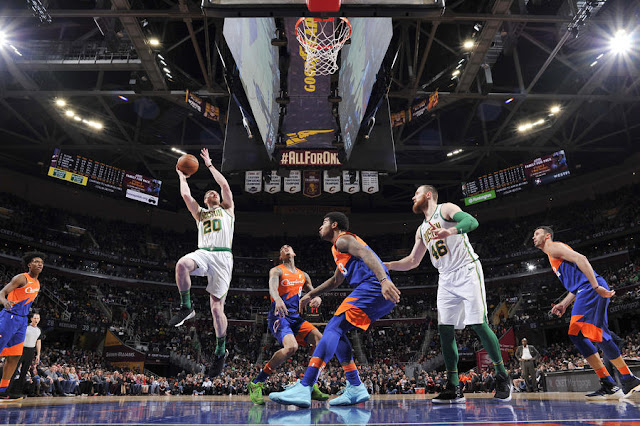 Baynes' game may have limitations, but protecting the paint isn't one of them. Al and Aron do a credible job of taking care of business around the hoop. Baynes-ey was on the floor for a relatively long stint of 24 minutes - scoring four points on 2-of-2 from the field, while taking down two rebounds and blocking one shot. Horford notched 19 points, eight boards, five assists and one block.

The two-bigs lineup won't work all the time, but against Cleveland's Kevin Love and Tristan Thompson, it was needed. Boston out-rebounded the Cavs 46-36 and held Cleveland's two big men to a combined 17 points. Baynes is certainly not a volume scorer, but the Celtics have plenty of those. Like Kendrick Perkins in his day, Aron is a bruiser that can cause opponents to think twice about driving into the paint. Look for more two-bigs lineups, some of which should include Greg Monroe. We may hear Brad Stevens give the Moose call more often in the coming weeks.