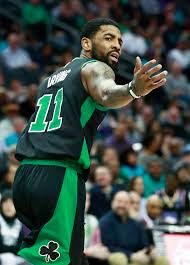 The Boston Celtics returned to action on Saturday evening in Charlotte, looking to rebound after Wednesday night's loss in Philadelphia. Boston would, however, be short-handed as Aron Baynes missed the contest with a sprained ankle, Al Horford with knee soreness (probably just a rest game though), and Gordon Hayward while under concussion protocol. Celtics rookie Robert "Time Lord" Williams got the starting nod for the first time in his short career.

The first half was highlighted by the ridiculously commonplace razzle dazzle action of Kyrie Irving, who dropped 16 in the first frame.

Irving only scored a deuce in the second, entering the half with 18 points on 8/11 from the field. Jaylen Brown was the only other real bright spot for the Cs, adding 17 points off the bench on 6/8 from the field, including a perfect 3/3 from downtown.

The Celtics exhibited beautiful ball movement and selfless play throughout the first half, but their game-high 10-point lead with 4:30 left in the first half was thwarted by a 17-8 Hornets run to end the frame thanks to hot shooting from Kemba Walker, Miles Bridges, and Malik Monk.

GAME NOTE:
The Celtics had a scary moment as Robert Williams missed a put-back dunk, landing hard on his back. He walked off on his own power, but was shortly ruled out for the game with a bruised tailbone, leaving the Celtics with Daniel Theis, Guerschon Yabusele, and Semi Ojeleye as their only healthy bigs.

SECOND HALF:
The Celtics and Hornets both came out hitting on all cylinders, with both teams trading runs. The Celtics, however, ended the third on a 9-0 run, taking a 98-89 lead into the fourth quarter. With Kyrie on the bench, Jaylen Brown and Terry Rozier III ran roughshot on the Carolinian bees, helping the Celtics extend their lead to 18 with 8:16 left in the game.

And then, Kemba Walker happened. And so too did the return of the cold shooting/bad-shot-taking-big-lead-relinquishing, WTF-is-this-team-doing Celtics. The Hornets capitalizing on the Celtics woes and back-to-back offensive fouls on Marcus Smart by hopping on Walker's back en route to a devastating 30-5 run to end the game.

Yeah, you just read that. And yeah, I just wrote that. I need a drink. The Celtics need a clue.


Here are the highlights (and lowlights) if you enjoy a big tease followed by a gut-shot.
Follow Edward Babaian on Twitter: @bojixbabaian