While most of us are cussing out the Celtics for their failure to close out games, I'll take the opportunity to remind Boston fans of Jaylen Brown's continued surge. In the loss to the Hornets last night, he poured in 29 points on 10-of-13 from the field ans 5-of-6 on 3-pointers. A total of eight of his 10 made shots were assisted by various teammates. The only question may be why the team didn't go to him more often. 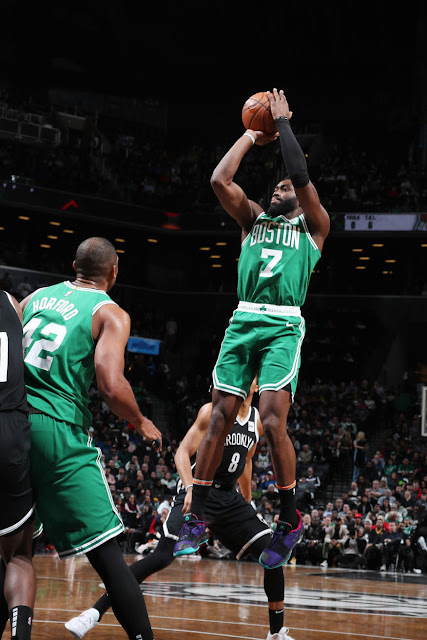 My readers know well that I have been repeatedly stressing the potential importance of Brown to any serious playoff run. Jaylen passed off for four assists in last night's game, while grabbing four boards and racking up one steal and two blocks. But it is the four assists that stand out. It has been a weak point for Jaylen in the early going.

Again i couldn’t watch but a good positive to take away is that Jaylen Brown is continuing his hot streak. He’s going to be massive in the playoffs for the Celtics

While Kyrie Irving continues his solid play on a consistent basis, many of his teammates have exhibited spotty play. But not Jaylen. While much of the attention has been on Jayson Tatum since the beginning of the season, Brown has been ignored or chastised by many. That seems to be changing and he keeps improving his overall game.

The squeaky wheel gets the grease and the player in the spotlight gets the attention. But Jaylen remains the Quiet Man who doesn't demand the spotlight. Despite all of that, he is getting the attention because of his improved play and consistency. The spotlight certainly shined on him last night.