For Black History Month, I present the following five gentlemen - what a starting five


While searching for something to write about this morning, I came across the photo below. Besides being Black History Month, it also occurred to me what an astounding starting unit this quintet would make. So I present Magic Johnson, Julius Erving, Kareem Abdul-Jabbar, Oscar Robertson and Bill Russell. 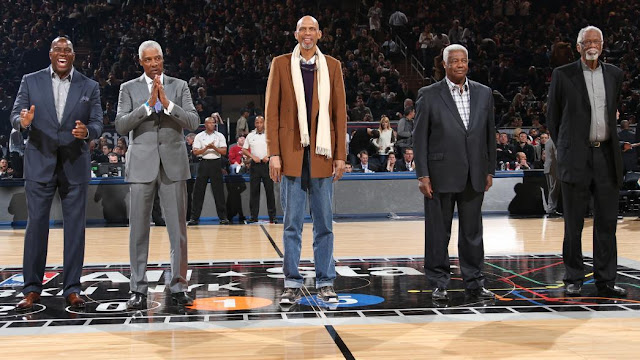 Think of it. Magic and Oscar in the backcourt - Kareem at the five - Russ and Dr. J. at the forward spots. They have it all - scoring, rebounding, length, defense, passing and the will to win.

But beyond the talent, these guys have true class. They garnered a total of 24 NBA Championships between them. Russ, Magic and Dr. J. played for only one NBA team their entire careers (although Julius played in the ABA). Jabbar and The Big-O each played for two teams, teaming up on the Bucks for one stint.

The photo is a reminder of what many consider a better time in the NBA. When, at least on the Celtics, a handshake or verbal agreement was as good as a signed, sealed and stamped contract. There was very little game-playing of Musical Teams - quickly find a team before the money stops. But I digress. These five gentlemen are fine representatives of Black History Month - and would have made one hell of a starting unit in their primes.