New year, new slate: what to look for from the Boston Celtics in 2019


Ending 2018 with a loss seemed fitting, given how maddeningly inconsistent the Boston Celtics were for the first three months of the 2018-19 NBA season.

Now, with 2018 in the books, can the Celts turn the page to a new chapter, and get back to winning ways so many of us expected as the season started? If they do, there's some key issues in need of attention, so let's take a look at some of the things Boston will need to address to be the best version of themselves they can. 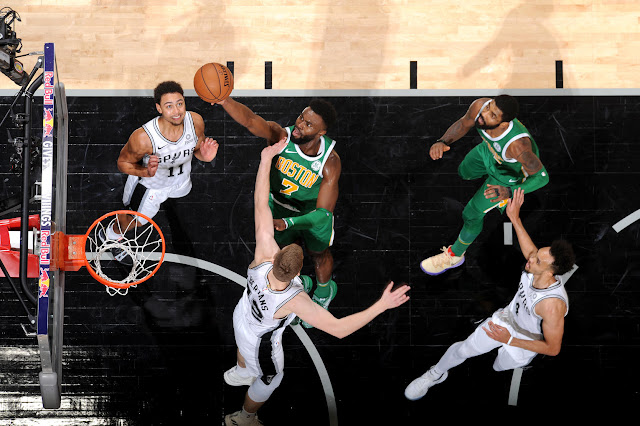 This team needs some, and badly. And I don't just mean the Ubuntu kind, though that sort is quite clearly the most important factor going forward. While we are seeing less hero ball from guys who, as impressive as last year's run was, haven't truly earned the right to try to "take over" games that are mostly being lost by perimeter shot-hunting and ill-advised shot selection.

Oddly enough, the usual culprits of this sort of thing are actually not the problem - it seems, for the most part, Marcus Smart has traded his eternal heat check and bad shooting with Jaylen Brown, and Marcus Morris has somehow taken on Jayson Tatum's mantle in terms of efficient shooting from deep and playing within the offensive schema, while giving the sophomore Celt his tendencies towards ill-advised midrange shots and ISO ball.


Al Horford: "This is a new team. It’s not the same team as last year. For us, it’s continuing to get to know each other, continuing to trust and play the right way."
— Boston.com Celtics News (@BDCCeltics) December 24, 2018

If this team is going to contend, a more varied palate of offense used when treys don't fall is imperative, and time is running out to get such an offense humming by the playoffs with the season's halfway-point just weeks away. Brown is the only player besides Kyrie Irving who has been consistently attacking the cup, and even then, it's not nearly enough.

Players also need to trust themselves, but in a way that isn't actively harmful; shooting your way out of a slump is fine if you do it right. Doing it right does not mean going for a fifth or sixth three-pointer after missing your first four - instead, slash to the basket and finish, or get yourself to the line. The brain just needs to see the ball go in for confidence to grow - it doesn't need to be splashy.

The team needs self-trust, as well - trust to execute the style of play Brad Stevens has been advocating that only rarely shows up outside of the first and last six minutes of the game, and trust to experiment with lineups and rotations, conversely, when things are not - and have not - been working.

This ties into trust as well, as in players need a trusting relationship with the medical team, each other and themselves concerning incidental injuries, chronic pain, and rehabilitation. Listen to the experts, don't try to force things you can't do (yet), and listen to each other if they happen to notice health-related issues in teammates. I'm not saying these things aren't happening, mind you, just that they need to.

We've already seen significant injury issues impact in-game play and availability this season, and at least with Gordon Hayward, injuries sustained from last season, impact availability and level of play as much as chronic issues like tendonitis has. Success is going to depend on using preventive rest to ensure the best possible health and depth for when the games count most.

This ought to be a no-brainer, but more often than not, the second and third quarters of games this year have become something of a doldrums for effort on one of not both ends of the court. That has to stop if the Celtics want to be a home team for the 2019 NBA Playoffs. And whiffing on a top-four seed is a very real possibility, with Boston currently firmly in fifth place in the East, a full two games behind the fourth-place Philadelphia 76ers, and 5.5 games behind the East-leading Milwaukee Bucks.


Jayson Tatum on how the Celtics pulled out the win: "It was a collective effort...It's the little things that matter to us now."
— Brian Robb (@BrianTRobb) December 26, 2018

There may still be plenty of times to catch up, but catching up will not happen because these guys step onto the court wearing green and white; they have to win, and not only that, teams ahead of them have to lose. And while the Cs' schedule is much kinder in terms of plus-.500 teams and home games in the coming month and year, resting on laurels nobody's even handed out yet isn't going to make that happen.

There's a lot of minor issues that need work as well, ranging from nailing down just what rotations and schema work, to whether or not the existing personnel makes sense for not only this season but future ones as well - and whether it's worth it to hang onto assets that aren't contributing much (if at all) to winning basketball if said assets are going to bring the repeater tax down on a team not even in shape for justifying a taxpaying season. There's also the elephant in the room of blockbuster trade targets to consider, both the well-worn rumors, and potential eleventh-hour surprises that may yet pop up.

What do you want to see out of the Cs this year? What do you see as crucial? Let us know your thoughts below, with whatever logic you have about why it matters to you.