With Kyrie Irving (eyes) sidelined, the shorthanded Boston Celtics were able to fend off the Minnesota Timberwolves 115-102 on Wednesday night. With the C's looking for scoring, Gordon Hayward led the way along with Terry Rozier, who entered the starting lineup for Irving. The third quarter struggles are a concerning trait if they continue, but being able to straighten things out and protect their home court was a welcome sight to open their homestead. 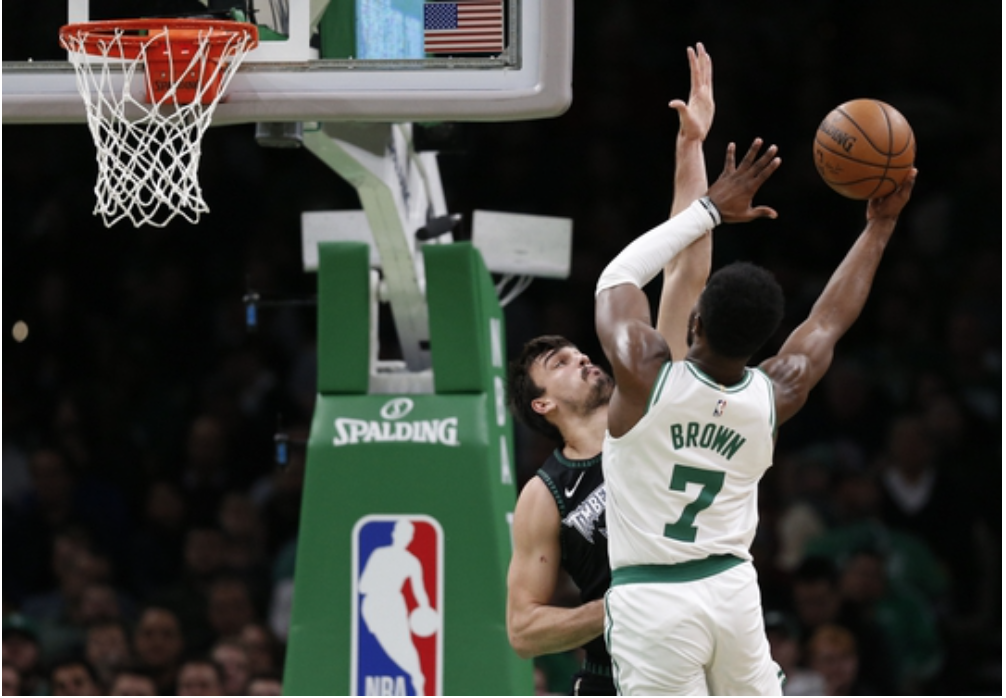 Hayward led all scorers with 35 points on an efficient 14-18 from the field, Rozier had 16 points, four assists, three rebounds, and five steals, and Al Horford chipped in 15 points. Andrew Wiggins led the Timberwolves with 31 points, while Karl Anthony Towns had 28 points, 12 rebounds, and seven assists.

As was the case on Christmas day, Horford, with the absence of Aron Baynes and Robert Williams, was going to get the start covering KAT, and he set the tone right out of the gates. After knocking down a midrange jumper to open the scoring, Horford locked up KAT on the block and forced him into a fadeaway jumper that resulted in an airball. After Rozier sauntered down the lane for an easy layup, Minnesota head coach Tom Thibodeau called a frustration timeout just a minute into the game.

Rozier, in typical fashion over the past two seasons, started the game on fire. He hit his first five shots from the field and had 11 points in the first 10 minutes of the game. The Celtics as a whole dominated on the offensive end, knocking down 11-19 shots (57.9 percent) in the first quarter. The only thing tempering their offensive upside was a few too many turnovers. While Boston was thriving, Minnesota was struggling from the floor. KAT had been bottled up, but the bench unit put together a 9-2 run over the final three minutes of the quarter to pull the game to 25-21.

Eight assists on nine field goals for the Celtics so far. Ball is popping on offense.

The Celtics started the second quarter on a 18-6 run to open up their lead to double digits. The three ball was dropping early, and some transition offense led to Marcus Smart throwing down a loud alley oop.

With KAT having a rough night on the offensive end, Minnesota just didn't have enough firepower to keep up with the depth of the Celtics. The Timberwolves were missing Robert Covington, Derrick Rose, and Jeff Teague, and it showed early in the second quarter. While the bench guys struggled for Minnesota, people like Semi Ojeleye, Daniel Theis, and Smart stepped up for Boston to make winning plays.

As the second quarter continued, the Celtics pushed their lead to as many as 21 points. The hot shooting continued, and every player that got into the game scored at least two points. Hayward came alive late in the first half, and scored 10 points in less than two minutes to keep the Celtics firmly in control of the game as they went into the halftime break.

After coming out of the locker room with the lead firmly in hand, a hard screen from KAT sent Smart to the ground in some significant pain just minutes into the third quarter. He immediately went to the back to get medical attention for his right shoulder. Smart is as tough as they come, and for him not event to try and keep playing through it was very concerning at the time.

Marcus Smart headed to the locker room with an apparent right shoulder injury. He looked to be in a lot of pain.

With Smart headed to the locker room, Hayward stepped in and carried the Boston offense. He scored 15 points in the third quarter and had a game-high 28 points heading into the fourth quarter. Unfortunately for the Celtics, Hayward was the only one consistently putting the ball in the net. What was once a 20-point lead fell to single digits late in the third quarter. KAT, who had been contained in the first half, started to impose his will on the offensive end, scoring 20 points in the frame. Defense was the issue in the third quarter, and coupled with the 46 points the Celtics gave up against the Spurs on Monday night, this has the makings of a very disappointing trend.

#Celtics have allowed 80 points in the past two third quarters.

While the game was trending in the wrong direction, it was a happy sight to see Smart come back into the game after being diagnosed with a right shoulder sprain. But just as one Marcus returned to the court, the other made his way off. After finishing a tough layup early in the fourth quarter, Marcus Morris winced his way down the court and eventually asked to be subbed out of the game with an apparent neck injury.

The Celtics righted the ship enough early in the fourth quarter to extend the lead back out to double digits. A 16-9 run to start the quarter gave Boston some breathing room and let the fan base take a collective sigh of relief. KAT and Wiggins did their best to keep the game close, but a vintage-Hayward performance and some timely play from their role players led the C's to a comfortable win.

Kryie-less Celtics get 35 points from known Wolves-slayer Gordon Hayward but both Marcuses get dinged up in the homestand-opening win.

The Celtics' next game will be a chance for revenge when the Dallas Mavericks make their lone appearance at the TD Garden on Friday night.