Celtics overcome option paralysis with Kyrie Irving out of action


Josh Coyne of DoubleClutch.UK and CelticsLife broke it down beautifully. From the start of this season, the Celtics have been afflicted with a malady known as option paralysis - the glut of lineup choices that needs time to unravel. In last night's victory over the Minnesota Timberwolves, Kyrie Irving out of the lineup with an eye injury reduced the number of choices - allowed for better ball movement - and resulted in the win. 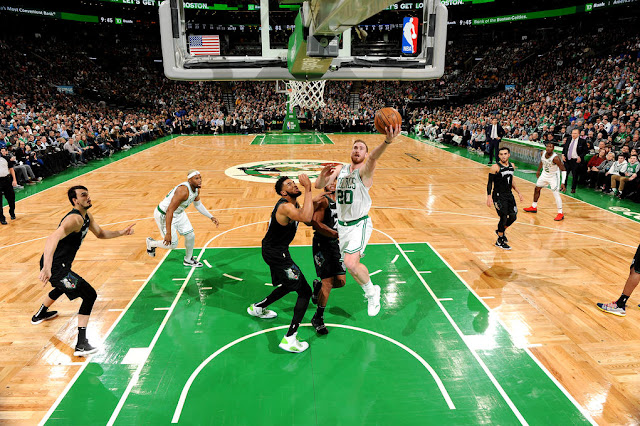 ‘Option paralysis’ is a term that has been heavily used in recent years, due to the glut of ‘must-see’ media available at our fingertips as consumers. You know that feeling when you scroll endlessly through Netflix because you can’t convince yourself on the right movie, or when you are presented with a menu at a restaurant only to ask for an extra five minutes from the waiter when they come to take your order? That is option paralysis.

Meanwhile, the ball moves more effectively with him out.

Can change, but right now that’s the case. pic.twitter.com/9EmEXDA0nM

With Kyrie out, Terry Rozier started the game and did his best T-Ro-as-starter act, scoring 16 points on 60% shooting, while adding three rebounds, five assists, five steals and one block.

Gordon Hayward still came off the bench but gave himself and Celtics fans a huge confidence boost with 35 points on 14-of-18 from the field and 4-of-7 on threes. Gordon also had five assists, and Boston out-assisted Minnesota 34-24. Celtics players were not standing around watching the Irving magic act, and the ball moved efficiently. And Hayward looked like the player we know he can be (Per DoubleClutch.UK's Josh Coyne):

Hayward’s reintegration has been a lengthy process. Within the last six months, he’s gone from retiring from the picking-up-marbles-with-your-toes game, to serving as one of Boston’s secondary ball handlers. He is still missing the elevation, the explosion and some of the aggression that comes with feeling entirely comfortable back on the court. It’s very possible that he will become the versatile, explosive, dynamic wing player he once was – just ask Paul George how possible that is. Stevens has faced the challenge of reintroducing Hayward to line-up at a pace that fits into Hayward’s final stages of on-court rehabilitation, while not sacrificing the touches of his supremely talented teammates – most of which can play Hayward’s position.

Let me make this very clear. Kyrie Irving is a ball-control point guard in the mold of Rajon Rondo, except that Kyrie can hit his shots from anywhere on the court. He is the best player the Celtics have and will be vital for success in the playoffs. But his absence forces better ball movement and the need for other players to step up. With Irving out of action, his teammates can no longer rely on his scoring and assists. They responded in a terrific manner last night, and let's hope it continues - regardless of when Kyrie returns to the court.