I wrote that Gordon Hayward-the-shooter was what the Celtics needed after his scoring eruption in the win over the Timberwolves. But Gordon did it all in Boston's 114-93 victory over the Mavericks last night - coming close to a triple-double in 30 minutes of play. 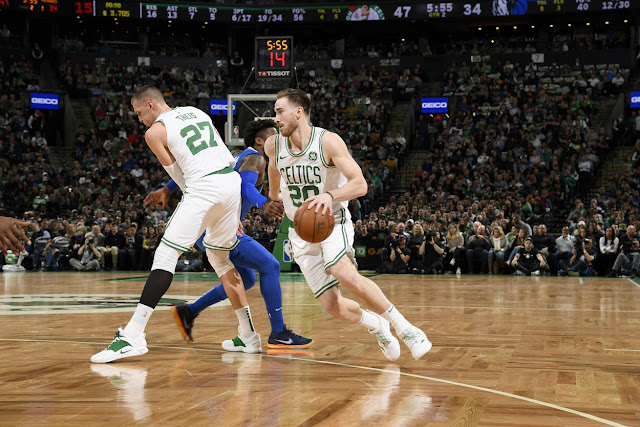 Hayward notched 16 points, 11 rebounds and eight assists in the win, the type of stat line we can expect in a number of future games. He didn't come through with the 35-point splurge versus Minnesota, but it wasn't needed. Gordon finished the game second in boards (11) and was tied with Al Horford for assist honors with eight. That is what Hayward does.

It’s fully expected that this year’s number will increase as the Celtics offense finds a better rhythm (assuming it does, right?) and Hayward feels more able to push off hard on drives to the hoop. But he never will be the offensive focal point of Utah vintage now that he’s on a team with Kyrie Irving and Jayson Tatum and others who are capable. Whereas the Jazz had to send the ball through Hayward to succeed, the Celts have more options and can play more to the soft spots in the defense.

This brings me to one of my longest-held theories, and it is that one of the hardest transitions to make is going from a saturation scorer in college — someone who can shoot at will is guaranteed quantity on the road to cool numbers — to having to wait maybe four, five or more possessions for your opportunity to arise. Shooting becomes less instinctive, and therein lies some of the difficulties for Jaylen Brown and Terry Rozier as they get fewer chances than last season.

“Yeah, it’s definitely a little similar to that,” Hayward acknowledged to the Herald. “It’s transitioning from a different offense and a different role in Utah, as well as coming back from injury and stuff. I think it’s a little bit of both of those things.”

So that's two solid games in a row for Hayward, and we will see more of them. Look for my article later today on Boston's "embarrassment of riches" (Gordon being one), and how it applies to the Kyrie/No Kyrie debate. The Celtics have a wealth of talent. They simply need to find a way to spend it wisely, efficiently and effectively.