Celtics Embarrassment-of-Riches and the value of Kyrie Irving


One translation of the phrase embarrassment of riches is more options or resources than one knows what to do with - almost too many choices. That has been the rather fortunate dilemma facing Brad Stevens. What the hell to I do with all of these guys? 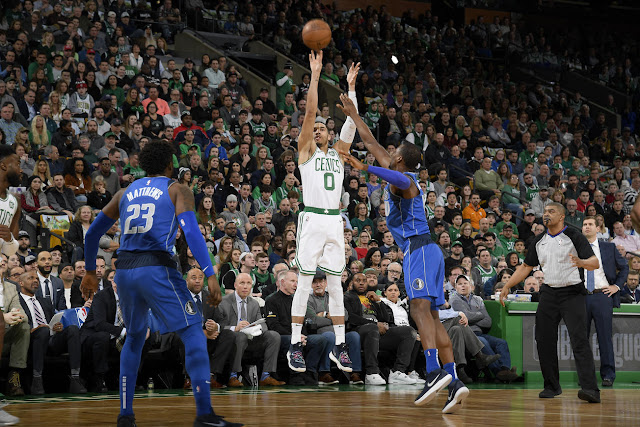 It is far too simplistic to say that the Celtics have won two games in a row with Kyrie Irving on the shelf - so the team does better without him. Kyrie is so damn talented that his teammates often end up standing around watching him do his magic act. He is mesmerizing with the ball in his hands, and his cohorts become spectators.

Take him out of the equation, and it is the 2017-18 post-season once again, this time with the addition of All-Star Gordon Hayward. Five Celtics players finished with double-digit scoring last night, led by Jaylen Brown with 21 points. The ball moved smoothly and efficiently. Boston racked up 35 assists to the Mavericks 16.

Killing the narrative that Kyrie is not a good leader or a selfish ball hog who is afraid to get overshadowed by his young teammates. Nobody wants his teammates to succeed more than Kyrie himself. https://t.co/mAnSWVjXh5

On the subject of embarrassment of riches and Kyrie Irving being a ball hog, let me say that he is so talented, he can do anything on the floor. He can shoot, drive, finish, pass off and rebound the ball. For the three games prior to his injury, he led the League in assists (10.7 APG), a number that reveals his efforts to get his teammates involved.

Kyrie Irving has pushed his share-the-ball message and last night his teammates transitioned from spectators watching him on offense to turning his message into action. Last season, it seemed almost every play went through Al Horford. Gordon and Kyrie have a history of ball-dominance, and Terry Rozier has been criticized for too much ball-control. Well, Gordon and Al shared assist honors with eight apiece. while T-Ro passed off for seven assists. The win and 35-assist total tell most of the story. Brad Stevens' embarrassment of riches may very well end in a glowing triumph.