Let's face it. Kyrie Irving is fast becoming the vocal-and-floor leader and face-of-the-franchise that we had hoped for. His family was there to watch his performance on the parquet stage against the rival 76'ers, as were millions of fans in front of their TV's, and he did not disappoint in this overtime thriller. Boston won in overtime, 121-114. 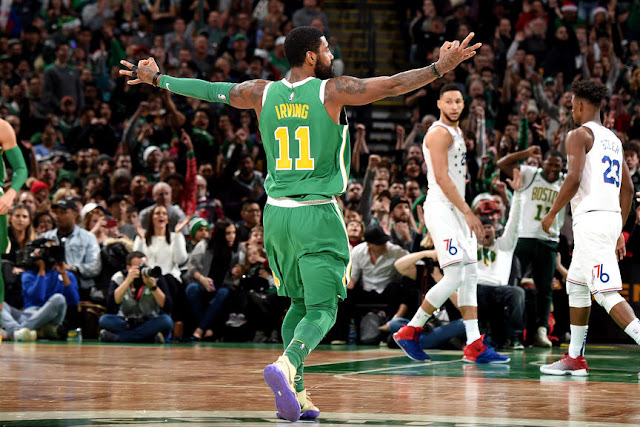 Kyrie Irving on his big Christmas day: “I told my teammates, I came in the locker room, I told them, ‘My family is here is to watch me play. I got 20-plus people from my family here and so I’m acting UP. Like, you guys have no idea, I’m so excited.’”

Kyrie has become as unstoppable on offense as any player in the League, and he tested the Philly defense right from the start. He had 16 points in the first quarter alone, and ended up with 40 points for the game on 52% from the field and 50% from beyond the arc, all while taking rebound honors with Jayson Tatum (10 boards each).

"The only guy to deliver more than Kyrie today...had a sleigh." - Grande

Make no mistake - Kyrie loves the Big Stage. The Garden parquet - Christmas Day - national television - versus the rival 76'ers - family members in attendance. Doesn't get any better than that. Or maybe it does.

MOST POINTS BY A CELTIC ON CHRISTMAS DAY

Irving his told us that he wanted his #11 raised to the Garden rafters so no one will ever wear it again. Well, in the above tweet he is in great company. If he keeps doing this he will be a lock to be up there.

But the biggest stage for Kyrie will be the NBA Finals, and that is where we will need his skills, leadership and absolute determination to win. The Celtics went a long way in the playoffs without him last year. He needs to be there at the end of this season. The stage is set.