The Boston Celtics pulled out a tightly contested overtime win 121-114 over the Philadelphia 76ers on their Christmas Day matchup. After letting the lead slip away late in the fourth quarter, the Celtics rallied back to force overtime, and the magic of Kyrie Irving put the game away. Boston has two impressive wins since their closed-door meeting, and things are trending in the right direction.

Irving led all scorers with 40 points on 17-33 shooting. Jayson Tatum added 23 points and 10 rebounds, and Marcus Morris chipped in 23 of his own. Joel Embiid led the 76ers with 34 points and 16 rebounds, while Jimmy Butler had 24 points and JJ Redick added 17 points. 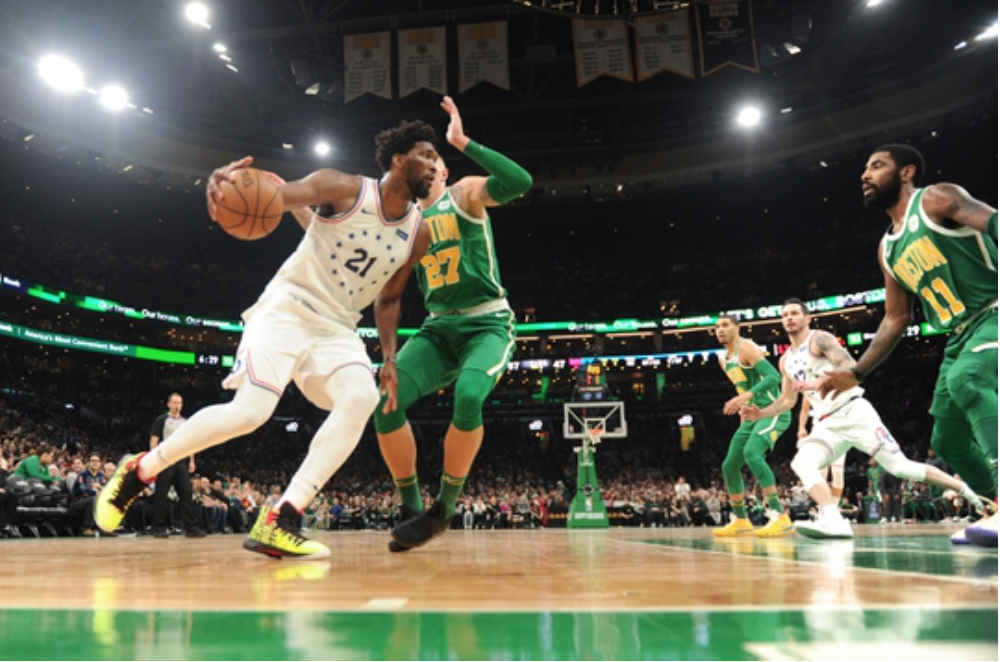 With Aron Baynes (hand), noted Embiid irritant, missing extended time, the Celtics we forced to slide Al Horford over to the center position to start the game. Embiid started the game on fire, posting up Horford on the block, knocking down a three, and hitting from the midrange.

You could feel the playoff atmosphere early on in this Christmas Day primetime matchup. The pace was frantic, Kyrie was flying around the court, taking charges and hitting the offensive glass. You could tell that these teams expect to be facing each other in April and May.

After Embiid put his mark on the game to start the game, Kyrie decided it was his turn to wow the national audience. Kyrie scored nine straight points for the Celtics, which spearheaded a 13-4 run to open up a six-point lead with three minutes to go in the first. In the post-team meeting era, aka the past two games, Kyrie has shown an increased aggressiveness to start the game.

Embiid's post game and the shot making of Redick kept Philadelphia within striking distance, and seven quick points from Butler to start the second quarter quickly closed the gap. But with the 76ers knocking on the door, the Celtics went on an 11-3 run to push their lead up to double digits. Kyrie continued to get wherever he wanted on the floor, and scored a game-high 23 points in the first half.

Boston shot just 20 percent from three in the first half, but still took a six point lead into the break, thanks in large part to the turnover differential. The C's had just two turnovers, while Philly had eight, which led to a number of fast break opportunities.

An 8-2 start to the third quarter from the 76ers quickly erased the halftime lead that Boston had built. Back-to-back threes from Butler and Embiid, along with a dunk from Ben Simmons forced an early "Mad Brad" timeout.

The Celtics were able to open the lead back up to double digits half way through the third quarter, thanks in large part to back-to-back threes from Marcus Smart. But the rest of the third quarter belonged to the 76ers. Butler and Embiid led the charge, while Kyrie mustered just three points in the frame after his first half outburst. After trailing by six at halftime, Philly went into the fourth quarter with a three point lead (89-86).

A quick 7-0 run from Philly with Kyrie on the bench opened up a 98-91 lead with just over eight minutes to go in the fourth quarter. After Embiid and Butler had carried the offense for most of the game, the 76ers were able to get some timely contributions from their role players. Brad Stevens had seen enough at that point, and quickly got his star point guard back into the game. An "Uncle Drew" layup from Irving got the crowd back into the game, and Terry Rozier knocked down a big three to cut the lead back down to two and force a timeout from Philly coach Brett Brown.

Four quick points from Tatum gave the Celtics their first lead of the fourth quarter at 102-101 with just under five minutes to play. After Tatum put the C's ahead, an Embiid dunk was the only scoring play over the next three minutes. Both teams traded scoring chances, but the defense tightened up as the time dwindled down. Wilson Chandler knocked down a huge three pointer to put Philly up 108-106 with just 36 seconds left after forcing a Kyrie miss on the previous possession.

With the game on the line, and having been bottled up on the C's last trip down the floor, Kyrie nailed a fallaway jumper over Butler to tie the game. Redick rimmed out a jumper as time ran out, and these Eastern Conference foes were headed for some holiday bonus basketball.

Jimmy Butler couldn't have defended Kyrie Irving any better on that jumper to tie it. What a shot. What a game.

Philly scored the first five points of the overtime period, but two quick buckets from Tatum and Gordon Hayward cut the lead down to one. A Simmons free throw bumped the lead up to two, but Kyrie decided that it was time for this game to be over. Back-to-back threes from way down town gave the Celtics a four-point lead that they wouldn't relinquish. Much like how the game started, hustle plays from Kyrie, including a ridiculous offensive rebound basically from the ground, sealed the win.

The Celtics will play their next game against the Houston Rockets on Thursday, Dec. 27.