The Boston Celtics winning streak continued Monday night, as they took down the New Orleans Pelicans 113-100. 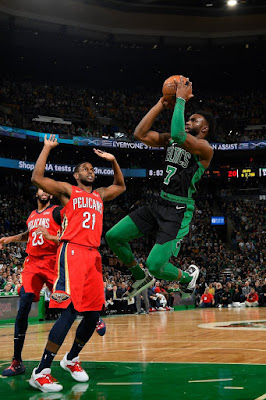 While the game stayed close early, a scorching hot shooting night for Marcus Morris, supported by strong outings by Jayson Tatum and Jaylen Brown (who did not start out shooting so well) was enough to hold the Pels at bay despite a 41-point outing from Anthony Davis.

For New Orleans, besides Davis, only Julius Randle made an impact on the offensive end of the court, scoring 20 of his own, and for Boston, depleted with multiple nagging injuries and illness keeping several key players out of tonight's rotation, Robert Williams got his first serious burn of the season.

The T I M E L O R D did not disappoint, logging multiple blocks on Davis while pulling down eleven boards and scoring seven points; it's going to get increasingly crowded in Boston's frontcourt if he can keep turning in performances like tonight's - a problem the Cs are certainly not upset about having.

While the team continued to ace its tougher games over this relatively light stretch of games with a win tonight, it did so with an entirely different lineup due to the injuries, perhaps signaling the team is truly clicking on all cylinders.