Celtics can't rebound at home against the Phoenix Suns and lose, 111-103 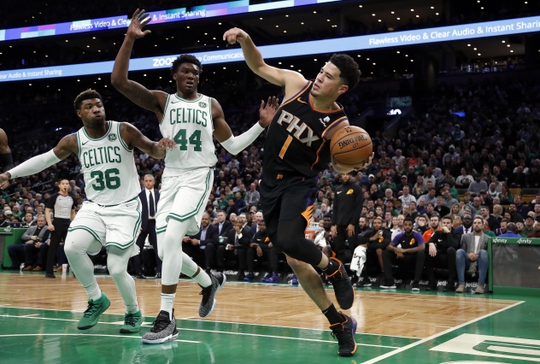 The Phoenix Suns came into the Boston Garden and beat down the Celtics on the glass and the scoreboard, 111-103. The Suns dominated the boards as they out-rebounded the Celtics 56-37. Aron Baynes headed to the locker room early in the game after fighting for a rebound and it was later reported he fractured his hand and will require surgery, which certainly had some impact in the C's getting out-muscled on the glass.

Kyrie Irving scored 29 points on 10 of 19 shooting with 10 assists and 5 rebounds. Jayson Tatum scored 18, grabbed 8 boards, and a 4 blocks, only to be beaten in that department by the Time Lord himself, Robert Williams, who swatted 5 shots to go along with 8 points and 8 rebounds after getting soem extra run with Baynes out early.

Deandre Ayton was a monster, scoring 23 points and 18 rebounds. Devin Booker led the Suns with 25 points and 8 assists, despite not having his best shooting night (9 for 23). TJ Warren chipped in 21 points as well.

Irving got the C's rolling as he put on a passing clinic to help jump-start the offense with 6 assists in the 1st quarter en route to a double-digit lead for Boston early:

The Suns did however respond in the 2nd, as Ayton and Booker powered them back into the game with 16 1st-half points a-piece. Phoenix rattled off a 23-6 run that as the Celtics played sloppy and couldn't buy themselves a rebound. The C's were able to weather that storm though, ending the half strong and icing it with a Marcus Smart heave that went down at the buzzer:

What a play by @gordonhayward to close out the first half. #Celtics lead the #Suns, 62-59. pic.twitter.com/qItzuVmdoV
— Taylor Snow (@taylorcsnow) December 20, 2018

The careless play that dominated the beginning of that 2nd quarter reared it's ugly head again after the break. Only this time, turnovers and poor shooting allowed the Suns begin to build themselves a lead through three quarters. An incredibly sloppy start to the 4th quarter, including a stretch of three-straight possessions ending in turnovers, found the Celtics trailing big.

The Celtics were able to chip away at a 13-point Suns advantage enough to cut it to 5 with just under two minutes to go, but our old pal Kelly Oubre Jr, recently acquired from Washington via trade, hit a dagger three to put the game out of reach for the C's.