Kyrier Irving says he loves playing with the Time Lord - Is that a message?


Despite some rookie lapses on defense, Rob Williams has become a fan favorite. And he seems to have picked up an admirer in teammate, Kyrie Irving. Kyrie's wizardry with the ball and his ability to go almost anywhere on the court (and do anything he wants), seems to mesh nicely with the Time Lord's ability to finish lobs, block shots and rebound off the offensive glass. 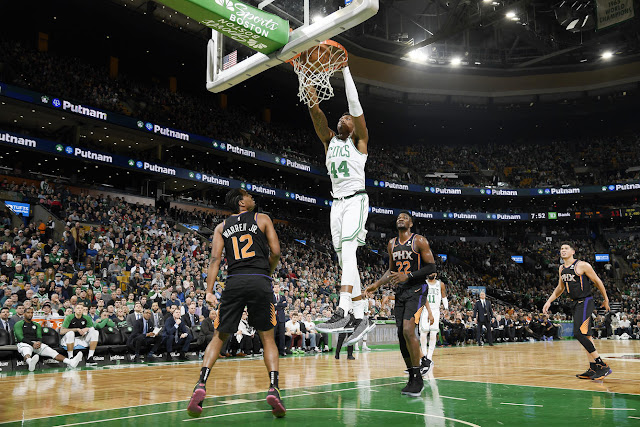 With centers Aron Baynes out for a month with a hand injury and Al Horford still nursing a knee issue, Williams may be seeing increased floor time soon. And Kyrie has no problem with that.

Kyrie Irving on Robert Williams: “You can see how easy it is for me and Rob. Going in, people are stepping up on me and he’s always a threat at the rim for offensive rebounds and lobs, so I love playing with Rob."

Irving just draws a ton of attention from defenders. His ability to drive, pull up for a jumper or pass to the open man absolutely demands attention. Rob logged 24 minutes last night in the loss to the Suns, and he scored eight points on 4-of-4 shooting. He also grabbed eight rebounds, five of them of the offensive variety. Just as Chris Paul and Blake Griffin comprised the infamous Lob City duo, the Celtics may have their own version in Kyrie and the Time Lord.

Granted, Williams is still a raw rookie project, but his length, athleticism and specific skills are all there. The rawness can only be eradicated by experience. And it may be time for Brad Stevens to give this talented young man a longer leash. You could hear the Garden fans' excitement with every block and successful lob. In the balance, the Celtics may gain more than they lose with the Time Lord on the floor.