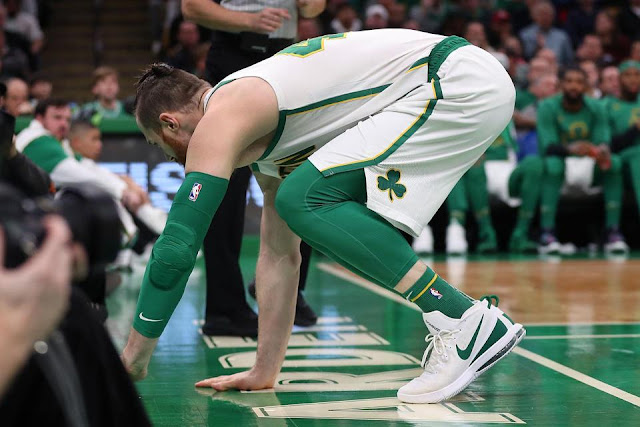 The Celtics big man from the land down under, Aron Baynes, will be sidelined for tonight's game against the Chicago Bulls due to the sprained left ankle he sustained the other night against the New York Knicks.

The #Celtics have termed Aron Baynes DOUBTFUL for tomorrow's game against the #Bulls because of his left ankle sprain.

The only reason he's DOUBTFUL and not OUT is because he's Aron Baynes and he doesn't adhere to the rules of modern medicine.
— Adam Kaufman (@AdamMKaufman) December 7, 2018

Since this tweet, Baynes has been downgraded to OUT.

If it were up to him though, he'd wrap his ankle in duct tape and hit the hardwood. But there's no need to run against the Bulls tonight when we have a big Christmas Day game against the Philadelphia 76ers coming up -- a game where Baynes' size and strength will surely be needed to give Joel Embiid hell.

"He's progressed really well, he did a lot yesterday, but just not quite ready to play," Coach Brad Stevens said of Baynes.

Having depth is always an asset, but especially so when the injury bug makes an unwelcome appearance. Unfortunately, it appears that Al Horford is questionable tonight with knee soreness (likely just another rest game), so Daniel Theis will get a lot of run. Rob Williams is in Maine on assignment, so it looks like we'll be playing a lot of small ball tonight. Hopefully he'll get called up thought, as this would be a tremendous opportunity for him to get some extended PT. Semi Ojeleye could also be seen doing some dirty work in the low post too.

While the Bulls came up with an impressive win against the Oklahoma City Thunder last night, they boast the 4th worst record in the league. And, considering our offense is rolling and we seem to (hopefully) have made the turn we need, we shouldn't need Baynes tonight anyway.

Rest up, big fellas. We got this.