The Maine Red Claws lost to the Raptors 905 last night, 108-104 - the crowd looked damn thin - but Rob Williams was on display for those in attendance. He notched 16 points, eight rebounds, two assists, one steal and two blocks. And bad knees? Not that I saw! He runs the floor like Bill Russell and Robert Parish. 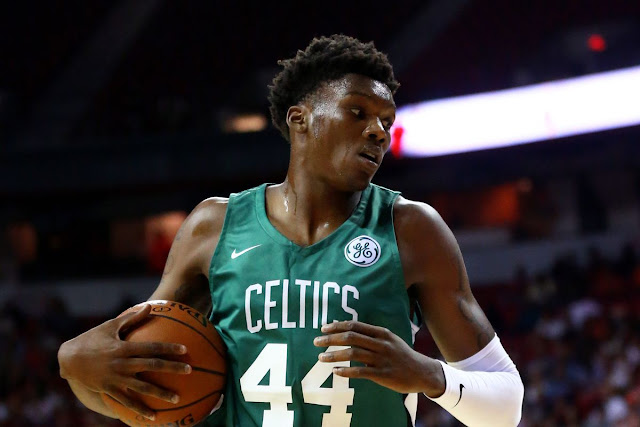 The videos below are all worth watching. Rob only had two assists, but both were right on the money. This big man can pass the ball. There were some jams and a few Rob-Lobs to contribute to his 16 points. On one lob the ball was just passed high as he was covered inside, and he was way above everyone else to jam it in. Throw it up, and he will get it.

Me, dumb: “Guys should keep the ball in bounds when they block it, if they can.”

He managed to block one mid-range shot, and the ball went out of bounds. He will learn to keep more of those in play, but opponents at any level will know that he can cover them inside or out, and Williams will intimidate many of them. He is just so damn long.

Robert Williams' arms are so, so long, in case you hadn't heard. pic.twitter.com/GDsZ7fueC7

When Danny Ainge drafted him, we knew that Robert had the physical tools to excel in the NBA, but his motor and basketball IQ were in question. It is too early to give a grade to his motor, but the basketball intellect is there. And frankly, I didn't have him pegged as an accomplished passer. But he is.

Rob doesn't run the floor with Bill Russell's gazelle-like bounds, but it certainly looks like the knees are fine. And so is he. I have instituted the Williams-Watch for roughly the same reason I follow Zion Williamson at Duke. The Celtics haven't seen anyone like Rob in decades, and the NBA hasn't seen anyone like Zion for the same period of time. Take a quick look at Russell's speed, athleticism and versatility. It may be enlightening to those that never got to see him play.