Jayson Tatum's shot was off for a few games, but it's back 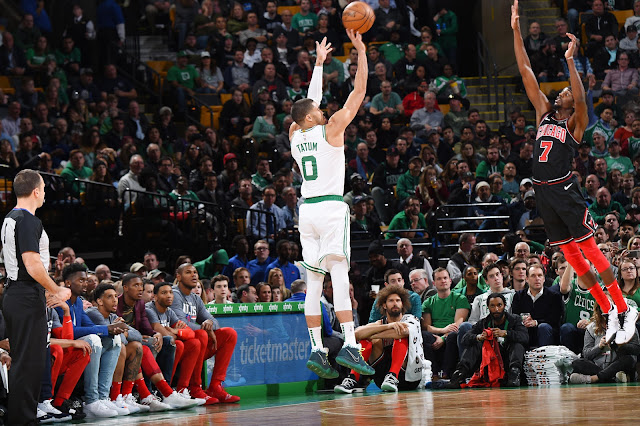 It was only a few games, but Jayson just wasn't hitting his shots. Against the Suns, he was 1-of-7 on field goals and 0-for-1 on treys. Versus Denver, he was 5-of-14 from the field and 1-of-4 beyond the arc.


Jayson Tatum shot 4-of-8 from beyond the arc, marking the first time in his NBA career he's made at least four 3-pointers in consecutive games


His best offensive game on the road came against Portland where he poured in 27 points on 50% from the field and 56% from the 3-point line. He also had eight rebounds and two blocks in that same game


Jayson Tatum is looking confident in his sophomore season!


Jayson's offensive game is still smooth but he has learned the hesitation dribble and has perfected creating space for himself. He really doesn't need a lot of room to get off a good shot. He often gets compared to Kobe Bryant, but I keep seeing a lot of Paul Pierce in him. The online sports betting comparisons are many.


Just like so many basketball stars, this kid just plain lives - and loves- the game. And he has since he was much younger. I see him having a great sophomore season and becoming a mainstay for the Celtics in the very near future.