Did Kevin Durant's "That's why I'm out!" mean he's heading to free agency?


So the NBA chess game continues. The pieces (players) move around the board (country). One GM loses a piece to his opponent (rival GM), and the game continues. One of the next pieces to be taken from its (his) present position may be the Warriors Kevin Durant. 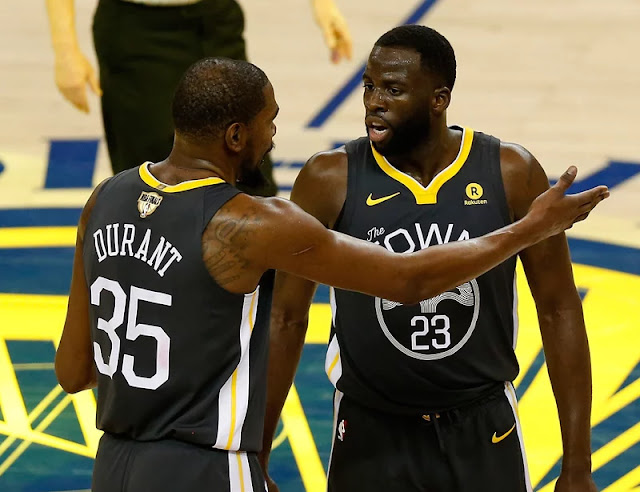 Underrated part of KD vs. Dray:

”That’s why I’m out” 🧐 pic.twitter.com/ukEsbKNgMv

At least according to the above tweet, Kevin may have blurted out during his dust-up with Draymond Green, "That's why I'm out!", perhaps implying he is going to be gone from Golden State via free agency this summer (per International Business Times' Abhinay Kini):

As posted by a Twitter user, the 30-year-old appears to be saying, "That's why I'm out," during the confrontation with Green.

Of course, it's not guaranteed that he's talking about his impending free agency, but it's definitely a possibility, especially with reports claiming one veteran Warrior being aware that he's headed elsewhere next year.

Where might he go? The Los Angeles Lakers are always in the chess talk, and the New York Knicks are another possibility. The Clippers Jerry West talked Durant into coming to the Warriors, and he may make a similar pitch for Kevin to head south to LA. The Celtics are another possible destination - just ask Big Baby Davis.

Glen Davis thinks KD will sign with the ... Celtics 🤔

Now, granted, Big Baby may not be considered the greatest NBA analyst of his era, but he may know something. It can't be totally discarded. Egos are clashing in Golden State, and although Green was partially responsible for Kevin coming to the Warriors, that relationship has soured, and Durant may be getting restless.

Kevin has a player option for next season and doesn't seem too fixed on committing to the Warriors beyond this season. He is definitely a top-4 player in the League, and though listed at 6'9", he is a solid 7' in shoes - and he does everything extremely well on the floor. His huge salary would be a dilemma for Danny Ainge, but a sign-and-trade might make it all work. Danny knows how to do this stuff.