Celtics pull off massive comeback over Suns in overtime, 116-109 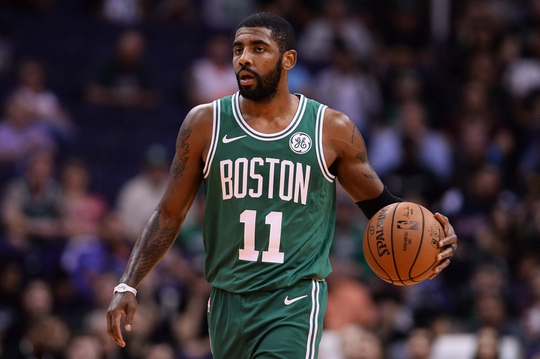 The Boston Celtics came back from a 22-point deficit to beat the Suns in Phoenix, 116-109. Kyrie Irving had a monster performance late as he took over the game posting 39 points, 6 assists, and 7 rebounds to help overcome a huge Suns lead. Jaylen Brown had 17 points, 6 rebounds, and 5 assists in his start and Marcus Morris went for 17 points, 8 rebounds, and a huge shot to send the game into overtime.

Devin Booker matched Irving's scoring with 38 points of his own, as well as 9 assists, and T.J. Warren had 29 points and 7 rebounds for the Suns in an effort that ultimately fell short.

The C's got roasted in the 1st quarter as the Suns came out swinging early and posted a massive advantage as they posted 30 in the first frame:

The Celtics starting lineup was a non-factor in the 1st half as Irving was the only player in green to hit from the field in the opening half:

At halftime Kyrie Irving is the only Celtics starter who has scored. He has 13 points on 3-for-10 shooting. The rest of the first unit is 0 for 15 overall over 50 combined minutes.
— Jay King (@ByJayKing) November 9, 2018

Boston was better in the 2nd half as they got some rhythm shooting coming out of the break:

The Celtics managed to cut the deficit to 1 point with 7.3 on the clock in the 4th quarter, and after two made free-throws from the Suns they found themselves with a chance to tie the game with 6.1 seconds remaining...AND Marcus Morris nailed an open three off a feed from Kyrie to the send the game into overtime!

MOOK WITH ONE SECOND LEFT pic.twitter.com/oE5DGMfGzc

Irving went full Uncle Drew in overtime and seemed to either assist or score on every Celtic bucket, holding off a Suns offensive that was led by Booker in the extra time.

The C's managed to play perhaps their worst performance of the season through three quarters and still pull off a much needed victory on the road.