Marcus Smart certainly wasn't shooting the lights out against the Raptors last night in Boston's 113-101 loss, scoring only two points on 1-of-6 from the field and 0-of-2 on three-pointers. But he did have two rebounds, six assists, one block at was tied for second-highest plus/minus for the game. But his one play against the 7', 265-pound Jonas Valanciunas was masterful. The King of Chaos was back at work. 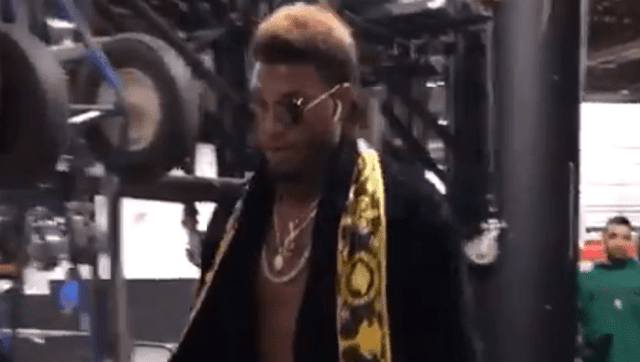 Marcus Smart is one guy you probably don't want on your Fantasy Basketball roster simply because his value doesn't totally show up on the stat lines. But he makes some of the most unorthodox memorable plays! Forcing Jonas into a jump ball was such a play. The way he cleanly got his arm between the bruising center's arm and body, and then got his hand on the ball, while maintaining that control was terrific. Is there anyone he can't guard?

Better look at it pic.twitter.com/ZS1pUiqOLd

Marcus had six assists, and he is definitely evolving as a distributor. A good example below:

This length-of-court play initiated by Smart's long outlet pass was right on the money. My take is that, despite the poor accuracy last night, Marcus' instincts on offense are starting to catch up with his reactions on defense.

Marcus' mom, Camellia, called him the Little King, thus his royal garb upon arrival for the Philly game. But to us, he is the King of Chaos for the disruption he causes to the opposition. What other player would you truly love that is averaging only 4.5 points per game while shooting 30% on field goals and 50% on free throws? Anyone? Bueller?