Jaylen Brown is the forgotten star of the Celtics

We are already approaching the middle of September and with that comes a lot of excitement for Boston Celtics fans. Training camp is fast approaching, and the Celtics went through a mostly uneventful offseason. Much of the offseason consisted of Boston attempting to reload with essentially the same roster as they try to run it back with a fully healthy team. 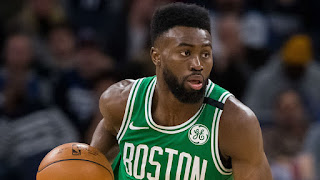 The excitement of the upcoming season is centered around the healthy returns of super star point guard Kyrie Irving as well as star small forward Gordon Hayward. Yet this isn’t the only exciting thing that was going on. Jayson Tatum was given an 87 rank on NBA 2k which created some buzz as well and both Aron Baynes and Marcus Smart were given new contracts to return to the Celtics.


All of this is absolutely exciting for both NBA and Boston fans alike, but it has also made a lot of people forget about starting shooting guard Jaylen Brown and just how good he is and will develop to be. Brown is coming off a postseason in which he averaged 18.0 points a game and a regular season in which he averaged 14.5 points per game. He was thrusted into a more responsible role due to the injury to Gordon Hayward and an even bigger role when Kyrie Irving went down. It all led to him leading the Celtics to game 7 of the Eastern Conference Finals alongside rookie Jayson Tatum.


Tatum is a year younger and spent his postseason breaking Boston records, but Brown averaged just .5 points less then him and received a considerably less amount of attention. Stephan A. Smith has been high on him for quite some time and believes he is going to “special” as he has gone on the record about on several occasions.


Has Jaylen suddenly become the forgotten man on this loaded Celtics roster? In retrospect, this isn’t a bad problem to have but it is still surprising that he does not get more attention. Brown was drafted number three overall and is known as a rising star throughout the league. He was able to be a leader and volume scorer even with defenders keying in on him which makes him very dangerous going into this season. All the attention will be on Irving, Hayward, Horford and Tatum and it will give him plenty of open looks. If Jaylen is your fourth or fifth option, then it is no surprise that many see the Celtics as a favorite to win a championship in the near future.
Photo by Brad Rempel/USA TODAY