And so it is with Kyrie Irving and Sue Bird; the former, one of the game's biggest sneakerheads (and a champion in his own right) was so excited to hear that Bird, one of his favorite players in the WNBA, wore his sneakers that he got on the phone with Nike to tell them to hook her up with whatever she wanted - and they did. 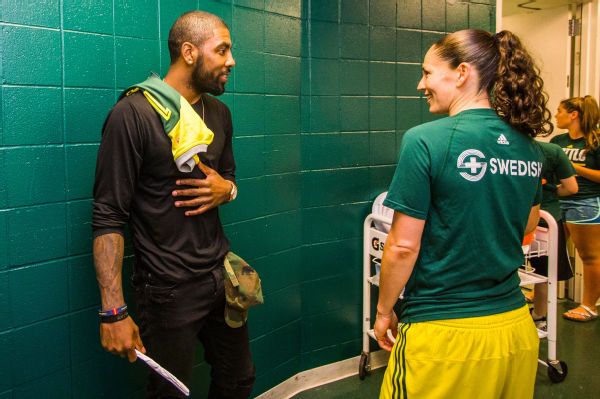 The former University of Connecticut and current Seattle Storm star, "the greatest point guard to ever play the game" according to Kyrie (per Matt Ellentuck of SB Nation), has been rocking Irving's kicks in her run to the WNBA Finals, where she's poised to win the championship (it would be her third) this Wednesday with a victory over the Washington Mystics - take a look at a selection of the kicks of Irving's she's been rocking on-court:

View this post on Instagram
As part of the 'Banding Together to Fight Homeless’ campaign, I’ve joined the effort and will wear custom Pearl Jam shoes in the second half of today’s WNBA All Star game! The link to auction the shoes is live and can be found on the Storm social media channels as well as StormBasketball.com — https://www.biddingforgood.com/auction/auctionhome.action?vhost=seattlestorm&aalias=homeshows
A post shared by Sue Bird (@sbird10) on Jul 28, 2018 at 9:32am PDT

View this post on Instagram
🔥 @sbird10 Granny PEs 👵🏻 My sis Sue Bird wanted some fire for the finals. She wanted something resemble her being the oldest woman in the @wnba so we had to do it! She’s a legend! @seattlestorm y’all got this! @breannastewart30 comin soon! @kyrieirving #kyrie4 #seattlestorm
A post shared by Kickstradomis Customs (@kickstradomis) on Sep 5, 2018 at 4:06pm PDT

You can see at least some of the shoes being worn are paying the gift forward in fundraising for a good cause, and the others have some symbolism weaved in. There might not be a Boston-based WNBA team to win double banners UConn-style (though the Connecticut Sun isn't too far off), but it's certainly not out of the questions that the next two banners won in each respective league will be won by point guards wearing Kyrie colorways.