Four Malice-at-the-Palace participants at TD Garden for BIG3 - no repeat!


Yes, that right! The BIG3's appearance at TD Garden on Friday night was not a re-visitation of the infamous Malice at the Palace, even though four of the people involved were there in various capacities. 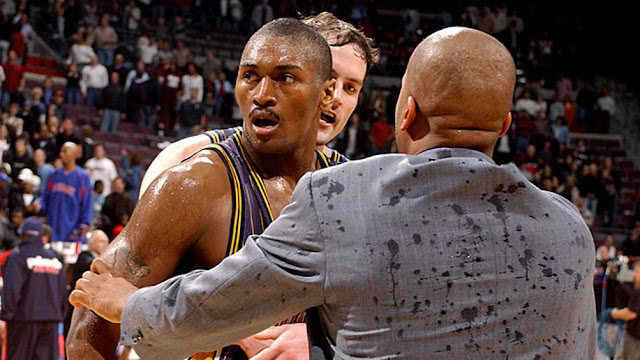 First, let me state that Rick Mahorn, was there at the Palace of Auburn Hills on November 19, 2004, as a radio analyst for the Detroit Pistons, and his role in the melee was as peacemaker trying to stop it (believe it or not). Rick's role with the BIG3 at the Garden on August 3, 2018 was as coach of the BIG3 team, Trilogy.

Metta World Peace, now having reacquired his previous moniker (Ron Artest) was a driving force in the brawl, but he was relatively mellow on Friday, his only indication of aggression was hip-checking me on the way to the locker room, and that was unintentional.

Stephen Jackson and Jermaine O'Neal were also "Malice" participants, but like Artest, they were only in Boston as players in the BIG3 League, with no indication of malice at all.

The brawl lasted a long time, and for those wishing more info on the spectacle, use the Wikipedia link for more detail. The horrid incident was long and frantic, and here is some analysis via Wikipedia:

Jermaine O'Neal later said, "As bad as it looked on TV, it was at least 20 times worse in person.") Pacers assistant coach Chuck Person compared the situation to being "trapped in a gladiator-type scene where the fans were the lions and we were just trying to escape with our lives. That's how it felt. That there was no exit. That you had to fight your way out." Players' children and others in the audience cried from fear and shock. Derrick Coleman stood near (Larry) Brown and Brown's ball boy son to protect them. The remaining seconds of the game were called off and the Pacers were awarded the 97–82 win. Fans booed the Indiana players as they were escorted from the court by officials and security, and continued to throw beverages and other objects (including a folding chair that nearly hit O'Neal) at them as they walked under the tunnel to the locker room. No players from either team spoke to the media before leaving the arena. Eventually, police officers were able to swarm the arena, threatening to handcuff those who wouldn't leave. Nine spectators were injured, and two were taken to the hospital.

In the video, Greg Anthony cites large intake of alcohol by fans as a precipitating factor in the brawl. That had little chance of happening at TD Garden. Many concession stands never opened, and beer and food lines were extremely long, causing many fans to forgo the beer and return to their seats. Keeping beer drinking in check may have been on the minds of the BIG3 execs.

Security was also very tight. As members of the press, my daughter, Lisa, and I had almost total access to various areas but were seemingly viewed by security staff as the reincarnation of Bonnie and Clyde. We were often challenged, quite surprising for a retired Police Lieutenant (me) and the head of a Massachusetts Police Academy (Lisa).

The Artest formerly known as Metta World Peace talking to @MichaelRapaport about changing his name back to Ron Artest.

So all went well in Boston with the BIG3 coming to town. If you are looking for several hours of non-stop, basketball-related entertainment and easy access to sports celebrities, attend one of the BIG3 games if given the opportunity. Things do get admittedly noisy, so if that is not your thing, look for the games on Fox, FS1 and Facebook Watch. The games are definitely for real.