Has Danny Ainge gone too far this time??? 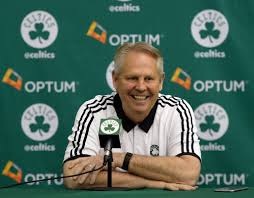 If you bit for the bait in the title, let me quickly say that this is a spoof. But Mike Dyer's tweet-reaction to Danny Ainge's photo and tweet-comment were just too much to ignore.

Dyer's reaction is hilarious. I have come close to writing that Ainge would trade his son, Austin, for the right return, but this one is ludicrous.

Actually, I was okay with the kid in orange and the girl in pink going, but the young one touching the puddle? That frankly is crossing the line for me. Danny should have given the little guy a chance. Maybe his impatience has returned with a vengeance!

Breaking: Danny Ainge has traded kid in the orange, girl in the pink, and the young one touching the puddle to the Brooklyn Nets for their unprotected 2022 1st round pick and a pick swap in 2023 https://t.co/FOnr2IQEQv