This upstart Celtics team could be a very unlikely Finals squad


If this Celtics team can defeat the Cleveland Cavaliers, they will certainly be one of the most unlikely groups to end up in the NBA Finals. 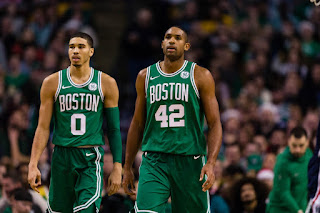 After the injuries to Gordon Hayward, Kyrie Irving and Daniel Theis, few predicted Boston to even get this far, let alone have a good chance of playing in the NBA Finals. There have been many Finals teams whose appearance there was viewed as unexpected and unusual, but very few as unusual as this Boston group.

The Allen Iverson-led 2000-01 76'ers made it even though no one on the team could score the ball other than The Answer. When they lost to the Los Angeles Lakers, they only had three players score in double digits, and one was Iverson. Shaquille O'Neal and Kobe Bryant averaged a total of close to 60 points in the playoffs that year, and the 76'ers were simply outgunned.

The 1975-76 Suns were remarkably similar to the present Celtics squad. Key players were young, and two (Alvan Adams and Ricky Sobers) were rookies. Paul Westphal, recently traded from the Boston Celtics, was also new to the team. Ironically, the Suns, with two rookies and a former back-up (Westphal) faced the Celtics in the Finals and took them to six games, including a triple-overtime thriller in Game Five. That Suns team simply couldn't overcome the teamwork of Dave Cowens, JoJo White and John Havlicek.

The 2003-04 Pistons were never expected to get to the NBA Finals, but they did so despite having no superstars. Most observers gave Detroit no chance of defeating that Lakers team but they did play magnificent defense and took home the Trophy. Detroit played a genuine team game while O'Neal, Bryant, Karl Malone and Gary Payton were doing their own thing.

The current Celtics squad presently has no superstars in action, although Al Horford's playoff performance has been of that caliber. They start one rookie (Jayson Tatum), one second-year man (Jaylen Brown) and one third-year guy (Terry Rozier). The team relies heavily on stifling defense to win games, and the offensive game has improved mightily.

#Celtics confident their winning ways against LeBron James & #Cavaliers will carry over to Cleveland in Game 3 (full column) https://t.co/ZnebQxeEzE

No one on the Celtics is expected to score 30 points, and the offense is well distributed among the squad members. Like that Pistons team, every Celtic is expected to play both one-on-one and team defense. Veteran Al Horford directs virtually everything that happens on the floor while Marcus Smart bugs the hell out of every Cavalier that is even close to him.

Marcus Morris had a double-double in the last game and we hope he keeps playing a team game. Aron Baynes plays tough defense and is hitting his 3's like no one ever dreamed possible.

Like the 2003-04 Pistons, no one expected this injury-plagued team to get to this point in the playoffs, and the Finals are within sight. The Celtics are an upstart group that has nothing to lose. I am certainly not betting against them!