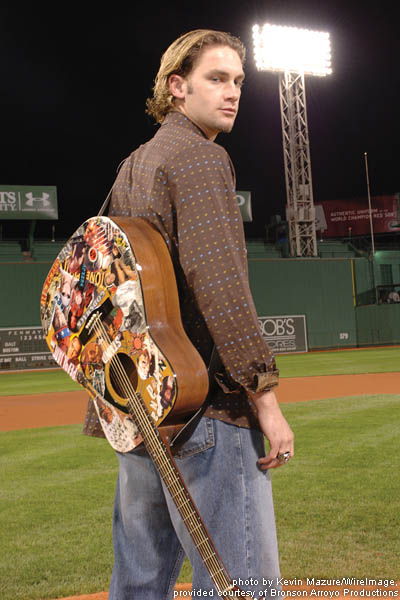 Former Boston Red Sox pitcher, Bronson Arroyo, will be ditching his mitt and replacing it with a guitar. The seventeen-year MLB veteran officially retired as a Cincinnati Red the other day, and the team held a ceremony in his honor during their game against the Red Sox. Arroyo was gifted the signature rocking chair that retirees are often presented with, for their future days of lounging as old, graying men, and after the game, he played a concert in the infield of the Great American Ball Park for a few lucky fans. Although, now that I think about it, Arroyo doesn't seem like the kind of guy that will be lazing during his free time, or graying for that matter, as he's had the same long, blonde flow for his entire career.

Bronson has been playing music for a long time, and in 2005, he released his debut album called Covering the Bases, which is an album full of rock n' roll covers, one of which being a Boston classic: Dirty Water by the Standells. Joining him on his recorded version of the song is Johnny Damon, Lenny DiNardo, and Kevin Youkilis.


In 2015, when Arroyo was a member of the Arizona Diamondbacks, he and a few teammates (Aaron Hill and Mark Trumbo) jumped on stage during a DBack's fan event, and played a few tunes for the crowd. On Arroyo and his music, Trumbo said:


He's legitimate. He's got legitimate talent. I wouldn't be the least bit surprised to see him do a lot of this post-playing career. He's got an incredible voice, an incredible feel for music in general. He's very passionate about it and it's a pleasure to get to play with someone that capable.


In 2016, Bronson returned to Fenway Park and joined Pearl Jam on stage for the singing of their song, 'Black.' Arroyo said that, "playing with Pearl Jam was one of the greatest nights of [his] life."

Now that he's retired, Arroyo will pursue his music career more seriously, and he'll be playing live at a Maine Red Claws game in November. He'll hit center-court at halftime of the Celtics' G-League affiliate's rumble with the Erie BayHawks, the Atlanta Hawks' affiliate team.


Sox fans - Bronson Arroyo will be at our game against @ErieBayHawks on Nov. 5 - and will perform at halftime! Tickets on sale Oct. 9 pic.twitter.com/4SmH1H3wrF
— Maine Red Claws (@maineredclaws) October 5, 2017


Arroyo is remembered around Boston for his signature corn-row hair style and for the infamous ALCS affair, when Alex Rodriguez slapped the ball out of his glove attempting to run to first base. Cheers to Bronson Arroyo on a stupendous MLB career, and for helping the Sox break the Curse of the Bambino in 2004. Lets hope his career in music goes as well as his career in sports did, and for goodness sake, everyone go to the Red Claws game on November 5th. The guy sounds like he really wails.


Oh, you thought that this was a Celtics' site?