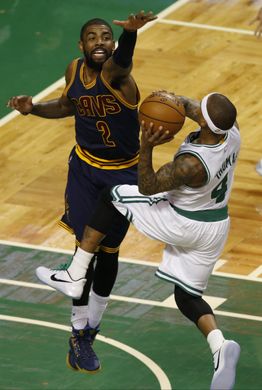 The Celtics knocked off the reigning NBA champion Cavaliers in the TD Garden, 103-99. Celtics were led by Isaiah Thomas who tallied 31 points with five assists and Al Horford, who almost put up his first triple double in green after a rough first half. Horford finished with nine points, ten rebounds, and ten assists.

The Cavs only had three players who scored in double figures, Kyrie Irving and LeBron James, who each put up 28 points, and Derrick Williams who had 13.

Avery Bradley and Amir Johnson were welcome contributors in the early minutes of the first half. The two tallied the first nine points for the C's, punctuated by a putback slam by the big man on a missed three by Bradley. But then came the bricks.

Boston couldn't convert at the basket. Al Horford, who had a miserable first half, missed wide open shots, including a point blank layup at the rim. That miss seemed to plague the Celtics for the next three minutes as they couldn't hit a single bucket. Finally, six minutes into the quarter, Isaiah Thomas hit his first basket, a contested layup in the lane, but it still didn't find the C's their rhythm.

Fortunately, the Celtics were able to keep the Cavaliers quiet during that stretch, and they only trailed by a few points in the closing minutes of the first. But in the final minute, Cleveland rattled off three straight buckets to build a six-point lead at the end of the quarter.

That momentum carried over for the Cavs into the second frame, and it was clear the Celtics were frustrated. The old man, Richard Jefferson, threw down an alley-oop off the pass from LeBron James, hung onto the rim for a little bit too long, and Terry Rozier was right underneath him. Once Jefferson let go, on the inbound Rozier threw the ball at him and was T'd up immediately by the ref.

That didn't help the Celtics. Deron Williams knocked down a three, and the C's looked defeated, trailing by nine. But someone had to step up, and Kelly Olynyk decided to take the responsibility. He forced his way to the rim, taking advantage of mismatches against the much smaller Kyle Korver to get easy layups underneath. That's when it became a slug fest, and the Celtics couldn't claw to within five.

Finally, Jae Crowder and Isaiah combined to tie it up at 41 with four minutes left in the half. No one could pull ahead, and the final minutes were filled with a back-and-forth battle that left the score 50-49 Cleveland heading into the locker room.

The third was finally the Celtics quarter. Bradley, who seemingly can only score at the beginning of halves, sank a three to light the fuse in the third. Horford finally caught fire, and kept Boston in the game, with his defense, distributing, and scoring. The Celtics finished the frame up three, 74-71.

Then came the battle in the fourth.

The usual suspects came through for Cleveland: LeBron James, Kyrie Irving, and Tristan Thompson. On the Celtics side, Jonas Jerebko knocked down a big three, Jaylen Brown came through with some clutch plays down the stretch, and Crowder fought hard for the Celtics through the final 12 minutes.

Isaiah was probably the least effective through the first ten minutes as he only scored one point.

Doesn't mean he's not the king in the fourth. Two straight plays where IT couldn't find a clean shot, he made huge passes to find Crowder on the wing who knocked down a huge three to give the Celtics the lead with 2:06 to go. Next time down after Kyrie hit two free-throws, Isaiah twisted through the defense, trying to find something, and located Bradley who swished the trey to retake the lead.

That play proved you can't leave a good shooter open. Less than 20 seconds later, Boston learned that lesson themselves as Kyle Korver, who didn't have a single point yet, came off a screen and splashed home his first bucket of the night to reclaim the lead with less than a minute to go, timeout Stevens.

What's something Celtics fans pride themselves on? 17 banners? Most wins in the NBA? Well, tonight it's Brad Stevens sets out of the timeout.

It's fair to say this game became a shootout. IT, who was obscenely quiet as a scorer in the fourth so far, stepped back, drilled the three, and the Celtics were up by two again. But Kyrie Irving doesn't like losing. On an ISO, Irving drove, and an insane reverse tied it up again.

But Isaiah is the king in the fourth. IT runs it down pulls up just inside the free throw line, and draws the foul. He hit the free throws, and that gave the Celtics the lead for good.

It wasn't sealed yet, though. First Boston had to make a huge stop, which they really didn't at first. Avery Bradley was assigned to Kyrie, and he did a phenomenal job of defending the arguably toughest assignment in the Eastern Conference. Kyrie put up a contested fadeaway which went long, but the Celtics couldn't get the rebound. Tristan Thompson kicked it out to LeBron who then skipped it over to Derrick Williams who missed the three, Crowder got the rebound and was fouled, and the C's came away with the win against the reigning NBA champions.