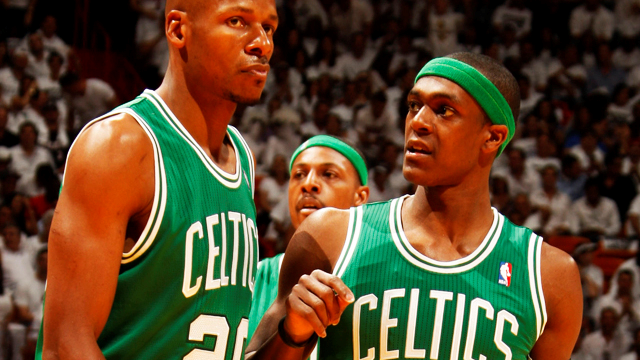 Celtics point guard Isaiah Thomas has a few ties with the newly retired Ray Allen. Born in Tacoma, Washington, Thomas grew up watching the retro Jesus Shuttlesworth when he was with the Seattle Supersonics. Now of course, Thomas is the face of the same franchise that Allen won a banner with. Due to this, he wanted to pay tribute to the former Celtic and Supersonic star after hearing of his retirement. Providence Journal's Scott Souza captured his comments:

“My dad used to take me,” the All-Star guard said following Tuesday’s Celtics practice. “So I’ve seen Ray when he had hair. I’ve seen him when he was wearing all the nice (Air) Jordans and everything.

“Jesus Shuttlesworth – it’s self-explanatory. He’s a Hall of Famer, one of the best shooters ever. It was great for me to see him at a young age, see how talented as he really was.”

Allen, who spent five seasons as one third of the "big three" in Boston, will become the second member of which to retire from the NBA after Kevin Garnett. Paul Pierce will be following soon after at the end of this season.

Rajon Rondo, who the Celtics will see for the second time already Wednesday night against Chicago, played alongside Allen while he was here in Boston. It was only after a joking jab at Allen that Rondo gave props to his great career:


Rondo on if Celtics should retire Ray Allen's number: "Without a doubt. He did a lot for this organization. He put a banner up there."
— Sean Highkin (@highkin) November 2, 2016

Ray Allen clearly left his mark on many- including past and present Celtics players- and will forever be considered one of the greatest shooters in the game.